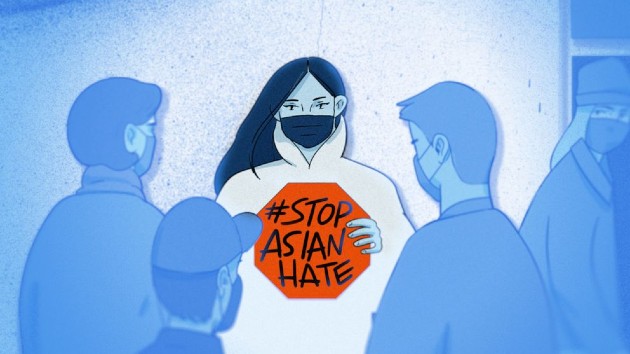 (NEW YORK) — A barrage of attacks on Asian Americans, reported to be fueled in part by biases pertaining to the coronavirus pandemic, have filled communities around the country with fear and rage.

But they have also exposed old wounds as advocates implore their fellow Americans to see and hear what they call a long-standing plight of invisibility.

“Give me confirmation that — I am American, too,” the congresswoman said. “I just haven’t been able to feel that in a long time.”

The coronavirus pandemic and its suspected origins in Wuhan, China, is cited as having led to a new onslaught of Anti-Asian discrimination in the U.S. that has waged on for almost a year.

There have been nearly 3,000 hate incidents towards Asian Americans in 2020 alone, according to data from the Stop AAPI Hate coalition, which set up a website to help track the cases, some of which were not reported to police. The group, which says it started to operate last year in response to an increase in discrimination, does not have statistics for 2019, but for context, in that year, there were 158 incidents of reported anti-Asian bias crimes in the U.S., according to FBI hate crimes data.

Some lawmakers and advocates, however, believe this represents a tiny fraction of the total in any given year — as many victims in Asian American communities may not report crimes due to distrust of the government or language barriers.

As a rash of recent attacks in California and a number of incidents — including the murder of an 84-year-old man — have been caught on video, many Asian Americans are speaking out to raise awareness, offer support to each other and affirm to all the “American” in the Asian American identity.

“Even though I and so many Asian Americans were born and raised in the United States of America, there are always instances where we are made to feel that we are foreigners,” Meng said. “That we are just not good enough in some people’s eyes to be American.”

On Jan. 28, 84-year-old Vicha Ratanapakdee was taking his morning walk around his neighborhood in San Francisco, California, when he was violently shoved to the ground by a random passerby.

Ratanapakdee, who his family said was beloved as “grandpa” by his neighborhood, was taken to the hospital following the attack. He died two days later.

Monthanus Ratanapakdee tearfully remembered her father as a “family man” and a gentle soul. He had moved from Thailand to San Francisco four years ago to help care for his grandchildren.

“He was a good senior citizen,” she told ABC News.

“I want him to stay alive and wake up … and come and see me again,” she said. “But he will never wake up again.”

A 19-year-old suspect, Antoine Watson, was arrested in connection to Vicha Ratanapakdee’s death and has been charged with murder and elder abuse, though the incident is not being treated as a hate crime. He has pleaded not guilty.

The suspect’s lawyer has insisted the attack was not racially motivated, but was due to a “break in the mental health of a teenager.” The lawyer said that the suspect had “no knowledge” of Ratanapakdee’s ethnicity because his face was covered with a mask.

San Francisco District Attorney Boudin told the New York Times that there is no evidence to suggest the assault was motivated by racial animus.

But in an earlier statement announcing the filing of charges against the suspect, Boudin said, “My heart goes out to the entire AAPI community for the harm and fear this tragedy has inflicted.”

The victim’s family, however, disagrees that the attack was not racially-motivated.

“He looked at a little Asian man and felt like he could take out his anger on him and it was justified somehow,” he added. “He ran from all the way across the street downhill and slammed him into the garage, into the floor and broke his head open.”

“We know that we’ve got to speak up and we can’t be quiet about this because that’s why this keeps happening,” Lawson said.

Ratanapakdee’s violent assault, which was caught on surveillance video, came amid a flurry of similar attacks against Asian Americans in Northern California.

The video sparked outrage and galvanized Asian American actors and public figures across the country to decry pandemic-related racism.

And though it is not a monolith, Asian America have seemed to come together.

‘None of this is really new’

While many have recently pointed to the pandemic and the Trump administration’s incendiary language as the root of the anti-Asian hate, historians note that the U.S. has a long legacy of xenophobia towards people of Asian descent.

“I would argue that none of this is really new,” Dr. Nobuko Adachi, a professor of sociology and anthropology at Illinois State University, told ABC News. “This stereotype of ‘foreigners’ toward Asians and Asian Americans have been used throughout the history of the United States.”

In 1882, the Chinese Exclusion Act barred the immigration of Chinese laborers and marked the first time in history that the U.S. placed broad restrictions on immigration, according to the U.S. Office of the Historian, which stated American objections to Chinese immigration stemmed in part from “ethnic discrimination.”

More than a half century later in 1942, Franklin D. Roosevelt signed Executive Order 9066 that paved the way for the forced incarceration of Japanese Americans during World War II. Some 112,000 people of Japanese descent were sent to “relocation center” camps.

The majority of those people (70,000) were American citizens.

“Since this is embedded into American mindset, people will easily forget that Asian Americans are really Americans,” Adachi said.

Last month, President Joe Biden said he signed an executive action “to combat the resurgence of xenophobia, particularly against Asian Americans and Pacific Islanders, that we’ve seen skyrocket during this pandemic.”

As videos circulate online of elderly Asian people being violently attacked, Adachi said, “We should now turn these tragedies as opportunities to vocalize to mainstream society that we do suffer racial bias and discrimination.”

“We need to tell our children to learn our history of what happened in the past, so they understand that what is happening right now has a clear history,” she said. “We need to deal with the issues instead of hiding our feelings inside, until we have a mental break down.”

The importance of ‘storytelling’ and ‘solidarity’

Amanda Nguyen, an activist and founder of the civil rights nonprofit RISE, told ABC News that in her experience, “Asians are often seen as an afterthought.”

“If you are anti-racist, you must acknowledge the Asian American experience,” she said. “And if you care about diversity, you must include us at the table.”

“We live here. We are Americans. It’s okay to talk about your feelings,” Adachi said.

The police killing of George Floyd last May sparked protests in all 50 states condemning police brutality against Black Americans and systemic anti-Black racism in the U.S.

Congresswoman Meng said the national racial reckoning also sparked new conversations “about racial justice and why Black lives matter, why the movement is important not just for Black people, but for all Americans.”

While the insidious legacy of racism in the U.S. continues to loom large, Meng expressed hope that the America her children grow up in will be a slightly better place.