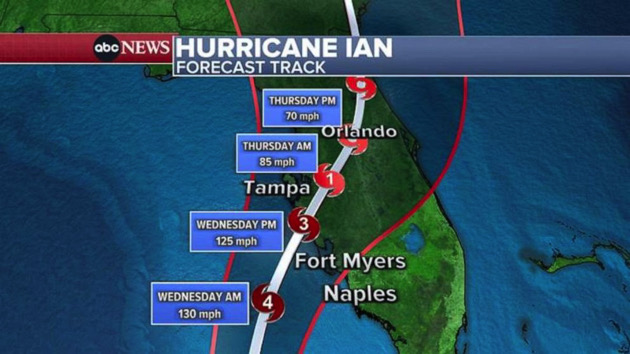 (NEW YORK) — A major hurricane is targeting Florida, bringing with it the threat of high winds, dangerous storm surge and even tornadoes.

Hurricane Ian, which is currently in the Gulf of Mexico, is forecast to make landfall as a Category 3 storm on Florida’s western coast, with sustained winds of 125 mph and gusts closer to 135 mph.

Landfall is expected Wednesday between the hours of 4 p.m. and 8 p.m. — though track, timing and intensity could still change.

As Ian moves north, tropical storm force winds could reach coastal Georgia and South Carolina. Tropical storm watches have been issued for Savannah and near Charleston.

Life-threatening storm surge is possible, with up to 12 feet forecast in Fort Myers and up to 8 feet possible in Tampa. Jacksonville could also see up to 6 feet of storm surge.

Flooding from heavy rains is also possible inland, in particular from Tampa Bay to Orlando and north to Daytona Beach and Jacksonville. More than 2 feet of rain is possible in some areas.

Tornadoes are possible with Ian’s approach, as it makes landfall and moves north through Florida for the next three days. Tornadoes are likely in Daytona Beach, Orlando, Tampa, Fort Myers and Miami.