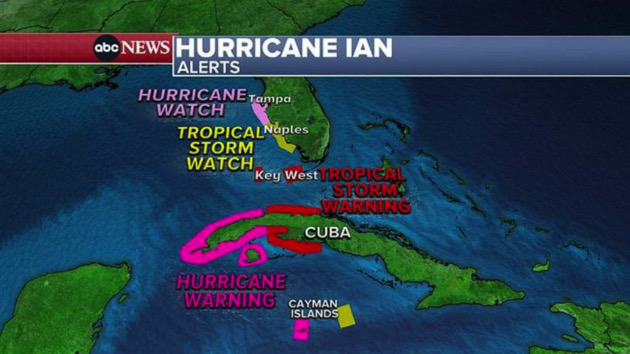 (NEW YORK) — Hurricane Ian, the fifth hurricane of the Atlantic season, is expected to rapidly intensify on Monday.

Ian is currently forecast to make landfall on the west coast of Florida or the Florida Panhandle by midday Thursday, though there is uncertainty about the hurricane’s track and intensity.

Florida Gov. Ron DeSantis has declared a “state of emergency” for the entire state, with storm conditions “projected to constitute a major disaster.”

The National Hurricane Center has advised residents of Cuba, the Florida Keys and the Florida peninsula to have a hurricane plan in place and to closely follow forecast updates.

As Ian passes Cuba, it’s expected to rapidly intensify, becoming a Category 4 hurricane as it moves through the Gulf. Hurricane warnings are in effect for Cuba and the Cayman Islands.

Models are split when it comes to Ian’s landfall in Florida; impacts could be as far north as Panama City and as far south as Fort Myers.

Some models forecast landfall by Wednesday afternoon between Tampa and Fort Myers, while other models predict landfall at the end of the week near Panama City or Apalachicola.

Hurricane watches have been issued in Tampa, Fort Myers and Naples.

The National Hurricane Center declared Ian a hurricane on Monday, as the storm gained strength on its way toward Florida.

“A Hurricane Watch has been issued along the west coast of Florida from north of Englewood to the Anclote River, including Tampa Bay,” the center said on Monday.

Sep 25, 10:19 PM EDT
NASA to reconvene on whether to take Artemis rocket off launchpad

NASA hasn’t decided whether to leave its Artemis I rocket on the launchpad as it monitors Tropical Storm Ian’s path toward Florida, the agency said Sunday.

The federal space agency’s mission managers will continue discussions on Monday about the next steps as its rocket was delayed again.

On Saturday, NASA scrapped its third planned launch attempt of Artemis I because of weather concerns. Artemis I was scheduled to launch on Sept. 27.

Engineers will decide if the rocket needs to roll back off the launch pad. If they do not roll it back, the next possible launch date is Sunday, Oct. 2.

Tropical Storm Ian is forecast to strengthen into a major hurricane as it nears Florida.

NASA had to scrub the first launch attempt on Aug. 29 because of a faulty temperature sensor and the second attempt on Sept. 3 due to a liquid hydrogen leak.

If the Oct. 2 launch doesn’t happen, the rocket will be taken back to the Vehicle Assembly Building at the Kennedy Space Center until the team decides on the next date.

Tropical Storm Ian has strengthened with maximum sustained winds at 60 mph and is expected to get stronger throughout the night as atmospheric conditions become more favorable for the storm.

Ian is forecast to become a hurricane on Monday, becoming even more intense likely into Tuesday.

Ian is moving to the northwest to the Northwest at 12 mph, with the center located 160 miles away from Grand Cayman.

Jamaica and the Cayman Islands are expected to experience heavy rain, a heavy surge and possible flash flooding over the next 24 hours.

Tropical Storm Ian has weakened slightly, but it is expected to not only strengthen but rapidly intensify overnight as it travels over warm waters in the Caribbean.

As of 5 p.m. ET, the storm system had maximum sustained winds of 45 mph and was moving west-northwest at 12 mph, with the center located about 220 miles away from Grand Cayman.

Dry air ahead of the storm has delayed the strengthening trend so far. But the rapid intensification is expected to occur Monday into Tuesday as the system continues across the northwestern Caribbean and closes in on western Cuba.

Over the next 24 hours, the outer bands will impact Jamaica and the Cayman Islands, bringing rounds of heavy rain, possible flash flooding and storm surge. Later Monday and into Monday night, Ian will be closing in on western Cuba and will likely bring significant wind and storm surge impacts to the region.

As of 5 p.m., the forecast track was nudged slightly eastward. Overall, the forecast guidance variability and uncertainty will remain high, and the track for where the storm will be from the middle to the end of the week will continue to shift over the next 24 to 48 hours.