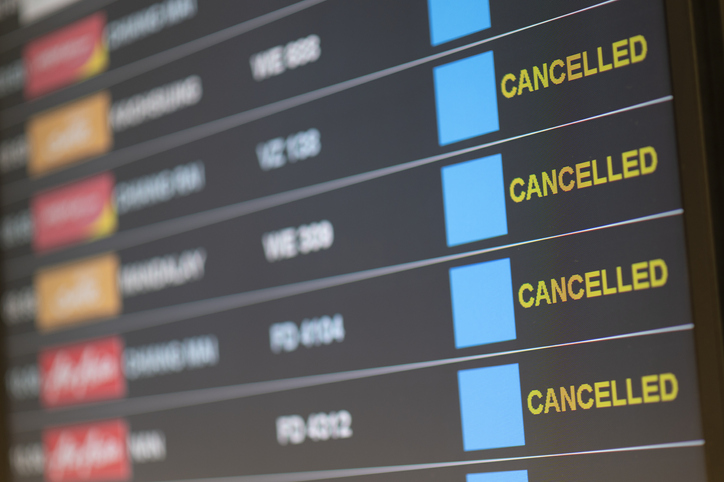 (NEW YORK) — If you had plans to travel by air for Christmas or New Year’s, chances are you are among the tens of thousands of passengers whose flights have been canceled over the last week.

Since last Wednesday, more than 20,000 flights across the U.S. have been canceled due to weather, airline, and airport disruptions, according to an ABC News analysis of data from flight-tracking service FlightAware.

The issues are expected to continue through at least the end of the week.

Instead of becoming stressed, panicked or anxious over delayed or canceled flights, experts offered advice on what you can do to stay calm.

Acceptance that you may be stressed

Dr. Aaron Brinen, an assistant professor of psychiatry and behavioral sciences at Vanderbilt University Medical Center, told ABC News one of the best ways to manage stress is recognizing that you’re stressed to begin with.

“So constantly checking in with yourself and see if I’m really overwhelmed right now,” he said. “Because there’s times where our brain thinks that we’re fine, but we feel like we’re about to explode.”

Brinen recommends taking a moment to stop and identify whether you’re experiencing stress, comparing it to a traffic light.

“It’s as simple as taking a moment, taking a breath, and seeing, ‘Am I a red light, meaning stop, I need to take care of myself right now? Am I a yellow light, pay attention slow down, or a green light, I can get about doing the frustrating stuff that I need to do right now?"” he said.

Brinen added that it’s okay for people to say they are frustrated or sad by the mass cancellations and not get stressed or anxious by feeling this way.

“Acceptance shouldn’t be confused with saying it’s acceptable,” he said, “So acceptance is saying this situation is the way it is right now, I can’t change the fact that I’m frustrated or sad, but it won’t be this way forever.”

Focus on something that makes you feel better

“What we need to remind ourselves is when we’re stressed the brain starts to spin and people get really anxious,” Dr. Luana Marques, an associate professor of psychiatry at Harvard Medical School, told ABC News. “So, what I tell my patients are approaches to get out of that anxious brain.”

One of those approaches is to try and control what is in your power so you don’t feel helpless and “shift the perspective” so you focus on doing something that helps you feel better.

Marques said recently her mother got stuck in Boston and she suggested those techniques to her.

“So, what I said to her in that moment, ‘Well let’s see what we can control’ and what we could control in that moment was calling the airline,” she said, “And then to shift her perspective I asked her, ‘What is one thing that if you did right now, would you help to feel better?"”

Marques continued, “For my mom, she loves sewing. So, she just went to sew for a little bit and that helped her.”

Meditate or listen to music

One tip for staying calm is to practice meditation or mindfulness, the experts say.

This can be in the form of breathing, mentally focusing on a sound or visual image or repeating a word or phrase, according to the National Center for Complementary and Integrative Health at the National Institutes of Health.

Although studies have shown mixed results, one study from Harvard University and Massachusetts General Hospital found people who practiced meditation saw a change in the genes that regulate glucose metabolism, circadian rhythm and inflammation, which helped lower blood pressure.

Listening to music you enjoy can be another way to lessen stress. Research has shown this reduces levels of the stress hormone, cortisol, which in turn helps you relax.

Additionally, listening to your favorite music can release a chemical called dopamine in the brain that makes you feel good, research shows.

If you are someone who is prone to panic attacks, the experts recommend taking some steps to prevent one from coming on.

“Reminding yourself that they will pass, that they will last for 10 minutes, that they will be uncomfortable, and that you’ll be tired afterwards,” Brinen said. “And if you’re a person who does have panic attacks regularly, now is the time to double down and triple down on the skills that you know.”

This can include practicing mindfulness, exercising — such as taking walks if you’re stuck at an airport — or cognitive restructuring, a series of techniques to help people identify and change negative thinking patterns.

Make sure you’re eating and drinking

The experts recommend whether you’re stuck at an airport or stuck in a city waiting for a flight or train out to be sure you’re eating and drinking.

Anxiety and stress can cause a loss of appetite so it’s important to make sure not too many hours go by in between meals, they said.

Marques said she has seen some patients confuse mental health symptoms with the side effects of being hungry.

“Often I’ve seen my patients confuse anxiety and hunger so they’re actually hungry but they’re saying they’re anxious,” she said. “I think it’s important to separate the misperception that maybe it’s hunger and not even anxiety.”

Brinen said to try and eat food that is close to what you eat regularly at home and to be cognizant of not consuming too many stimulants, such as nicotine and caffeine.

“If you’re finding that you’re really on edge and jittery, check have you gone from a half a pack [of cigarettes] to a pack or a pack and a half?” he said. “Are you drinking a lot more coffee? Are you digging into the chocolates because that’s all you guys have? Well, that’s packed full of caffeine.”

He added, “Stimulants make us more agitated and so, all of a sudden, if you find that you’re snapping at people, you want to be really careful.”