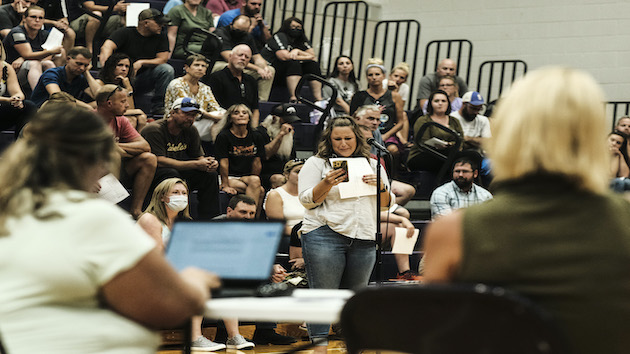 (New York) — School board meetings have become emotional battlegrounds for parents and local officials who disagree over mask and vaccine mandates as children return to brick-and-mortar learning.

Those rules have triggered legal challenges and public fury as many children returned to classrooms earlier this month, at a time when COVID-19 cases and hospitalizations are on the rise due to the delta variant, but children under the age of 12 remain ineligible for the vaccine.

Advocates cite the Centers for Disease Control and Prevention’s August guidance recommending universal indoor masking by students and staff at K-12 schools — regardless of vaccination status — due to the threat of delta.

Here’s a snapshot of the debate in four states:

In Arizona, the Republican-led state that never imposed a mask mandate throughout the pandemic, Gov. Doug Ducey banned mask mandates in schools and required a return to in-person learning in July.

This month he announced that all school districts and charter schools in the state “following all state laws and remaining open for in-person learning” would be eligible for grant funding through the American Rescue Plan, and offered up to $1,800 per student.

So far, over 20 districts have defied the governor and are requiring students and staff to wear masks indoors.

Earlier this month, the Chandler Unified School District voted against requiring face masks in the district of about 49,000 students and staff. Board member Joel Wirth stated, “I don’t think it’s worth losing $50-60 million dollars in funding that we can use to sanitize the facility and provide staff,” radio station KJZZ reported.

“My dad came to the [CUSD] board meeting Wednesday night to speak and he was moved to tears. He just couldn’t believe the way kids were being used as pawns,” Baker said.

“This is personal for us,” she said, noting that her nieces, ages 5 and 8, who attended school in nearby Queen Creek, “did catch COVID in their unmasked school, although they were masked, the week after school started.”

School Board member Lindsey Love was one of two board members who voted against keeping the current optional mask measure in place in Chandler.

She said that school board meetings have turned into a “circus” where people from out of the area have taken over. Love said a majority of parents in the district are in favor of masks.

“In our last meeting, it wasn’t a lot of Chandler parents, It was a lot of parents from some of the surrounding cities. We have a group that’s been going around to all the school board meetings to take over and push out the board,” Love told ABC News. “We’ve had board members receiving death threats. I’ve received death threats throughout this and harassment.”

Initially, people rallied at these meetings to open schools, then for and against masks, and now some people are against even quarantining kids who test positive for COVID-19, Love said.

“These meetings have become a bit of a circus. It’s not just masks that they don’t want. They read from this list, ‘We don’t want you to muzzle our kids, or indoctrinate our kids with your critical race theory agenda,"” she said. “It’s just a really odd cobbling of issues.”

Meanwhile in Florida, Republican Gov. Ron DeSantis gave parents the final say over whether children can wear masks or not.

But the first week of school led to chaos with thousands of kids isolated or quarantined due to COVID-19 cases and exposure across the state.

At the Hillsborough County Public School District in Florida, over 10,000 students and staff were isolated or quarantined due to COVID one week into the school year.

In a heated school board meeting last week one mother of a student yelled, “Have any children died?” as a result of the virus. Some people in the audience shouted back that children have. One high school student told the anti-maskers, “This tiny piece of cloth is not taking away your freedom. … Grow up.”

The district ended up voting to institute a mask mandate for at least 30 days, but parents would still have the option to opt their kids out with a medical note.

So far at least 10 Florida school districts have implemented requirements for masks in the classroom with no parental opt-out, according to The Associated Press.

But Florida’s State Board of Education threatened financial penalties to some districts if they didn’t get rid of the mandates.

In the Lone Star state, Republican Gov. Greg Abbott issued a ban on mask mandates in schools, triggering the Paris Independent School District in east Texas to add face coverings as a part of its dress code to get around the ban.

About 70 school districts have instituted mask mandates of some kind according to a list compiled by Attorney General of Texas Ken Paxton.

Houston Independent School District, mandated masks on Aug. 11, a move praised by teachers in the city.

“Gov. Abbott is on the wrong side of science, health and safety,” Jackie Anderson, the president of the Houston Federation of Teachers said in a statement at the time.

One exasperated Texas father stripped down to his swim trunks as he advocated in favor of mask mandates during a meeting Monday for the Dripping Springs Independent School District, near Austin, where masks are currently optional for staff and students in the district.

James Akers, a father of three who has a child currently in high school, said during public comments at the meeting that he hated the jacket, shirt and tie he’s required to wear for work, and proceeded to take off all three.

His bold statement, he said, was to demonstrate that “we follow certain rules for a very good reason.”

On Wednesday, a Dallas judge issued a temporary injunction against Abbott’s ban, allowing mask mandates issued by local leaders and school districts to remain in place for the time being.

At the same time, states that have enacted mask mandates for schools, such as Louisiana, have seen fierce opposition.

Louisiana’s Board of Elementary and Secondary Education’s meeting earlier this month ended in chaos when a raucous crowd of angry parents packed into a hearing room and refused to wear face coverings, shouting “no more masks.”

One person screamed, “Don’t infringe on our rights!”

At the time, Louisiana had the nation’s highest rate of new COVID-19 cases per capita.

Gov. John Bel Edwards, a Democrat, defended the mask mandate for schools, saying on his monthly radio show, “It is the only way that we have a reasonable shot to keep schools open and kids safe.”

“There is no reasoning with some people,” Edwards said on mask opposers. “The vast majority of the people in Louisiana do take this seriously.”