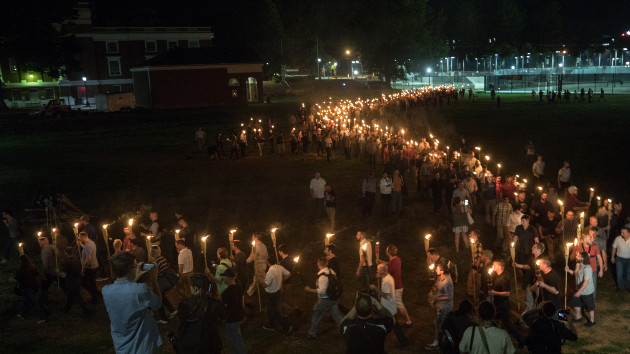 (NEW YORK) — The 18-year-old suspect who allegedly shot and killed 10 people at a supermarket on Saturday in the heart of a Black community in Buffalo, New York appears to have been motivated by a racist, far-right conspiracy theory that has increasingly found footing in mainstream U.S. politics.

Before traveling more than three hours from Conklin, New York, to the Tops Friendly Market to attack Black people, the alleged gunman, Payton S. Gendron, is believed to have posted a 180-page document on the internet fixated on the notion of “replacement theory,” according to authorities.

“Great Replacement theory is the notion that people from minority populations, both here and in Europe, are replacing the existing white, largely Christian [population],” said Larry Rosenthal, chair and lead researcher of the Berkeley Center for Right-Wing Studies.

The theory was embraced by far-right white nationalist groups globally and has inspired targeted mass killings, including the 2015 Charleston church shooting, the 2018 Pittsburgh Tree of Life synagogue shooting, the 2019 shooting at a Walmart in El Paso and the 2019 Christchurch mosque shootings in New Zealand — incidents that appear to have influenced the alleged Buffalo gunman.

The posts that investigators are looking at include online writings in which Gendron praises other mass shooters who were also motivated by racist ideology, including South Carolina church shooter Dylann Roof and the New Zealand mosque shooter Brenton Tarrant.

Rosenthal told ABC News that there are various “manifestations” of this ideology across the spectrum of the right in the U.S., but that in recent years those expressions have become more “explicit” and have “assumed rhetorical predominance” in the Republican Party.

“The magnitude of how much replacement theory has infiltrated [the] spectrum of the right in this country is something we haven’t seen before,” he added.

One in three American adults believe in elements of “replacement theory” and 42% of Republicans believe in the theory, according to an AP-NORC poll released in May.

“Replacement theory” is “a newer framework for an old idea,” according to Crystal Fleming, a sociologist at Stony Brook University who studies white supremacy.

Fleming said the ideology now known as “replacement theory” originated in the French nationalist movement of the 1900s.

“There were French nationalists who proclaimed that France would be taken over by, you know, outsiders and there was a way in which that ideology was shrouded in antisemitism and xenophobia,” she said.

“Replacement theory” was again popularized in the 1970s by an apocalyptic 1973 novel by Jean Raspail titled, The Camp of the Saints, in which Indian refugees invade France, according to Rosenthal.

And in contemporary times, the term “the great replacement” was coined by French nationalist writer Renaud Camus, who authored a 2011 book titled Le Grand Remplacement, arguing that white Europeans are being “colonized” by non-white immigrants and face a threat of “extinction.”

“It had immense resonance on the right here and around the world,” Rosenthal said, explaining that fear of and hostility toward non-white immigrants was a rallying cry of the Tea Party movement and was espoused by politicians like 2012 Republican presidential candidate Michele Bachmann.

The notion of “replacement theory” was prevalent in the U.S. as early as the 1920s, according to Rosenthal and was embraced by the fringes of the far-right for decades.

But the rise of former President Donald Trump in recent years propelled the theory into mainstream U.S. politics, according to some experts.

“This fear of being ‘replaced by minorities’ — that is Donald Trump’s legacy in the USA,” he added.

Trump’s anti-immigration platform — punctuated by a call to build a wall on the border of the U.S.-Mexico border — was the cornerstone of his 2016 campaign. In his 2015 campaign announcement, Trump called Mexicans “rapists” and said immigrants were bringing crime and drugs across the border.

Rosenthal said that “replacement theory” made what he considers “its strongest debut on the national scene,” at the so-called Unite the Right rally in August 2017 when hundreds of so-called alt-right groups took to the streets of Charlottesville, Virginia, to violently protest the removal of Confederate monuments.

“It went to the heart of the grievances of the far right in the USA, the grievances that…minorities were essentially pushing them out of — dispossessing them of their place at the tables of power and privilege in the United States,” Rosenthal said.

Amid bipartisan outcry, Trump refused to condemn the rally and insisted there are “very fine people on both sides” — an answer that he repeatedly defended throughout his presidency, telling ABC News in 2019 that he “answered perfectly.”

Throughout his presidency, Trump repeatedly used the word “invasion” to describe undocumented immigrants who are coming to the United States, used derogatory language to describe immigrants from Africa and Haiti and suggested that the U.S. should accept immigrants from countries like Norway, a largely white nation.

And in 2020, Trump stoked fears about immigration and popularized the phrase “Take back our country,” which became a rallying cry of his campaign against now-President Joe Biden. In social media posts and at various campaign rallies, Trump warned that the U.S. would be “overrun” by refugees if Biden is elected.

ABC News has reached out to the former president but a request for comment was not returned.

Rosenthal said that while references to “replacement theory” by politicians and political commentators have been more “implicit” in the past, some Republicans are becoming more “explicit” in referencing the theory to stoke fears about demographic change in the U.S.

Fox News host Tucker Carlson — a Trump ally — directly referred to the “replacement theory” in an April 2021 broadcast, claiming that “the Democratic Party is trying to replace the current electorate, the voters now casting ballots, with new people, more obedient voters from the Third World.” The notion was repeatedly promoted by various political commentators and politicians on the conservative network.

Florida Rep. Matt Gaetz tweeted in Sept. 2021 that Carlson is “correct.” The Republican congressman also criticized the Biden administration’s immigration policies in an April letter to Department of Homeland Security Secretary Alejandro Mayorkas, claiming that a surge of undocumented immigrants “is an attack on our sovereignty, and nothing less than a conscious decision to rewrite the rules of civilization, dissolve our borders, undermine our nation state, and displace our people.”

ABC News has reached out to Gaetz but a request for comment was not immediately returned.

Republican Rep. Elise Stefanik — the No. 3 Republican in the House — claimed in a Facebook campaign ad last August that Democrats are planning to “grant amnesty to 11 MILLION illegal immigrants” who “will overthrow our current electorate and create a permanent liberal majority in Washington.”

Following the Buffalo mass shooting, Stefanik and others became a target of criticism for appearing to draw on the idea of “replacement theory” in their rhetoric.

Stefanik’s office said Monday that making any link between her past comments and the shooting was a “new disgusting low” for Democrats and “Never Trump” Republicans, as well as the media.

Although Fleming said it is “indisputable” that Trump “helped popularize” the ideas behind “replacement theory,” she said he would not have been successful if a large part of the American electorate and political leaders did not hold similar views.

“We are certainly seeing a continuation of former President Trump’s influence,” Fleming said. “Candidates that he endorses … have a great deal of attention and influence, as well. But again, it’s never just been Trump.”

“He could not have been elected president if those ideas are not already deeply embedded in our politics,” she added.