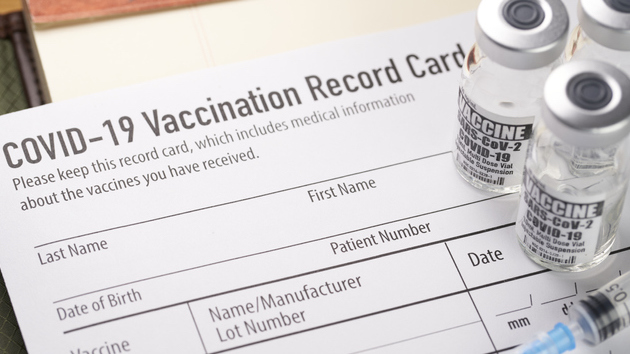 (WASHINGTON) — The Food and Drug Administration and Centers for Disease Control and Prevention are expected to announce that all vaccinated people will be eligible for booster shots at least eight months after their second dose.

But experts caution that vaccine efficacy is declining along a gradual slope — not a sudden cliff that drops off suddenly after eight months. For the nation’s public health experts, the question has become: What’s an acceptable threshold?

“We believe sooner or later you will need a booster for durability of protection,” said Dr. Anthony Fauci, speaking at Thursday’s White House press briefing. “We do not believe that others, elderly or non-elderly, who are not immunocompromised, need a vaccine [booster] right at this moment.”

“We are evaluating this on a day-by-day, week-by-week, month-by-month basis,” Fauci added. “So, if the data shows us that, in fact, we do need to do that, we’ll be very ready to do it and do it expeditiously.”

Vaccine experts have said protection from current COVID-19 vaccines is expected to wane slightly over time. Meanwhile, the delta variant is expected to chip away slightly at overall vaccine effectiveness. Executives from both Moderna and Pfizer have said booster doses eventually will be needed.

But so far, vaccines are still holding up well, experts said. Some studies have indicated a slight dip in efficacy, but mostly when it comes to protection from symptomatic and mild illness. Data thus far indicates that vaccines are still extremely effective at preventing hospitalizations and deaths.

Moderna and Pfizer both reported positive data from their ongoing phase 3 trials, which have continued to monitor volunteers at least six months after their initial shots. Moderna has said its vaccine remains more 93% effective against symptomatic illness after six months, while Pfizer reported a dip in efficacy to 84%, though both studies were conducted with slightly different criteria and prior to the emergence of the delta variant.

Although an independent study from the Mayo Clinic hinted that Pfizer immunity might wane faster than Moderna immunity, experts said it’s likely too soon to say that for sure.

Johnson & Johnson, meanwhile, has yet to report six-month data for its single-shot vaccine. The company, however, has released promising laboratory data showing a strong immune system response up to eight months later. And a real-world study from South Africa showed good protection against delta.

That said, some Americans aren’t waiting for a formal recommendation to get an additional shot. According to an internal CDC briefing reported by ABC News, approximately 1.1 million already have taken booster shots.

Many doctors have cautioned against this. Booster doses are still being studied formally, and there could be still-unknown risks associated with getting them. Researchers are still evaluating side effects, proper dosages and the right time to get one.

“The main thing I really want to stress to everyone,” said Dr. Simone Wildes, an infectious disease specialist at South Shore Health and an ABC News contributor, “is that, right now, we are not recommending booster shots. However, that could change.”

Other doctors and public health specialists also said they’re also not rushing to recommend boosters for the general public. Not only are current vaccines proving to be overwhelmingly effective, but doctors are also still collecting data on the potential impacts of an additional shot. And vaccine producers are still researching whether lower dosages will suffice as potential boosters.

“Everyone wants to know — when is the timeline?” Wildes said.

“We don’t know how long immunity lasts,” said John Brownstein, chief innovation officer at Boston Children’s Hospital and an ABC News contributor. “We don’t know what ‘waning’ means. We will clearly see that in the fall as we see a surge, and we’ll understand what delta or any future variant means for cases in the population.”