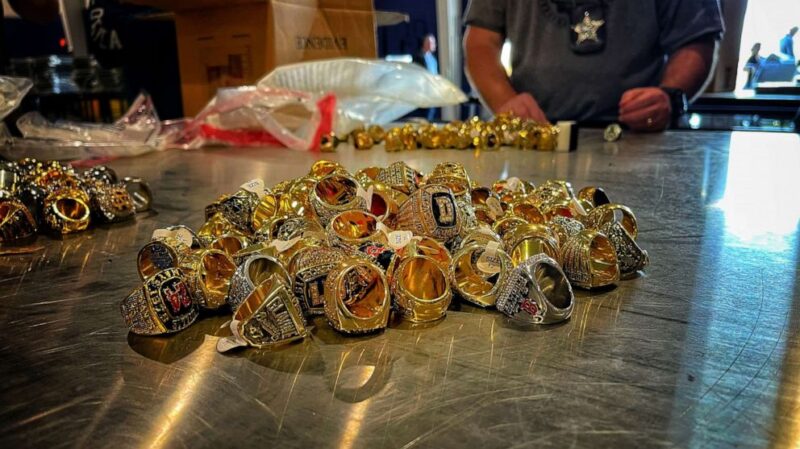 (WASHINGTON) — The Department of Homeland Security announced that the agency has seized 169,000 counterfeit sports memorabilia, totaling $44 million dollars ahead of Super Bowl LV.

Agents from DHS’ Homeland Security Investigations, are responsible for running “Operation Team Player” — an annual operation which focuses on combating counterfeit goods between every Super Bowl.

The agency says that due to the COVID-19 pandemic, they’ve seen a stark decrease in counterfeit goods coming from countries.

“Make no mistake — intellectual property theft is not a victimless crime. American manufacturers and retailers — and those they employ — as well as consumers are the losers in this game,” said Steve Francis, National Intellectual Property Rights Coordination Center director. “Fans who spend their hard-earned money to support the NFL and their favorite team can rest assured that HSI and its partners are working around the clock to ensure they are getting only genuine, high-quality officially licensed merchandise in return.”

The agency says they found the counterfeit goods at flea markets, retail outlets and street vendors.

“Operation Team Player is the most successful and long-standing collaborative effort to protect U.S. consumers from the sale of counterfeit sports merchandise and tickets,” said NFL Vvce president of legal affairs, Dolores DiBella. “The NFL is grateful for the diligent and tireless work of agents and officers from the IPR Center, HSI, CBP, and Tampa area law enforcement who have undertaken anti-counterfeiting measures that protect fans not only at Super Bowl LV, but all season long.”