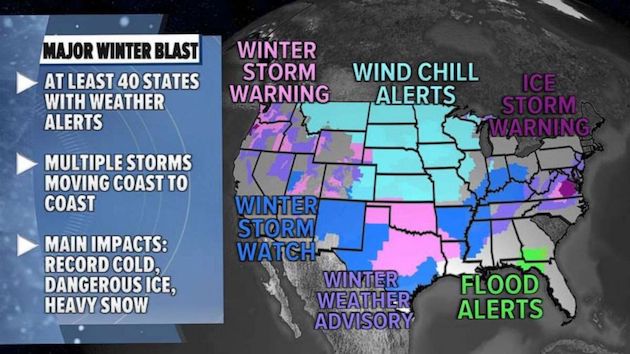 (NEW YORK) — This winter blast is going to get worse, with dangerous weather reaching nearly every region of the country — including a historic storm in Texas.

In the Pacific Northwest, a major winter storm is bringing heavy snow and freezing rain to Portland and Seattle.

Nearly 2 to 3 inches of snow has already been reported in Portland and Seattle, with more expected in the morning.

Over 0.8 inches of ice has been reported in some spots near Portland, knocking out power.

On the East Coast, a major storm is bringing freezing rain, sleet and snow.

Over .25 inches of ice is expected to accumulate in parts of Virginia, enough to down trees and knock out power lines.

The snow and ice will spread into parts of the Northeast Saturday from Washington, D.C., to New York. This will likely cause roads to be slippery — drivers should be especially careful.

In Texas, Gov. Greg Abbott has issued a disaster declaration in all 254 counties due to severe weather.

In Austin, all Saturday appointments are canceled at the city’s three COVID-19 vaccine clinics “due to inclement weather and icy road conditions,” the city said.

All appointments scheduled for the day — about 2,300 — were for second doses, officials said.

In Dallas, heavy snow will make travel extremely difficult on Sunday and Monday. The National Weather Service is calling this a historic winter storm and Abbott said the “Dallas-Fort Worth area could see near-blizzard conditions this weekend.”

By Monday morning, a heavy wintry mix will move across Houston and into Louisiana and Mississippi. Travel will be very dangerous as ice accumulates in the region.

The wind chill — what it feels like — will plunge in Texas. Houston is expected to feel like minus 3 degrees on Tuesday morning.