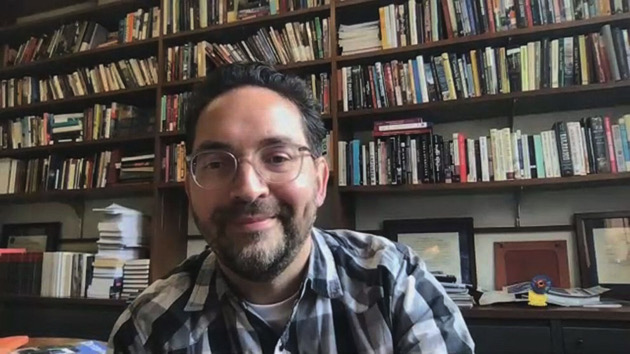 Geraldo Cavada, director of the Latino and Latina Studies Program at Northwestern University, speaks with ABC News via videoconference on Sept. 14, 2020. - ABC News

(NEW YORK) — Sept. 15 marks the first day of Hispanic Heritage Month in the United States. For many across the country, this is a way to celebrate Latino culture for a few weeks with food, music and festivals.

Daily, Latinos in the U.S. are reminded that they are different — whether it’s because of their different skin tones or the accents in their names — so for many, getting a month to celebrate their culture seems like both an understatement and an overcorrection.

“We are Latino every day, we’re here every day, our communities exist every day, we care about our jobs and education every single day,” said Geraldo Cadava, the director of the Latino and Latina Studies Program at Northwestern University.

“These are just facts of life and facts of the United States, and we are a really important part of what it means to be American,” Cadava said.

But there is still much work to be done in how Hispanic Heritage Month is celebrated and welcomed in the U.S., and how it clashes with the complexities the community faces day to day.

Experts like Stephen Pitti, the founding director of Yale’s Center for the Study of Race, Indigeneity and Transnational Migration said that when it comes to educating Americans on the heritage of the Hispanic community, having a month is simply not enough to educate people on Hispanic background, history, and even the terms used when labeling Latinos.

“This label, ‘Hispanic,’ it’s complicated,” said Pitti. “It’s one that offers sometimes to bring people together. But we would make a major mistake if we don’t think hard together about the ways in which this category also can lead to the profound, very damaging exclusions, which don’t recognize the complexities of our communities, and the real different needs and demands of different sorts of people in our communities in the 21st century.”

Historians, like Pitti, said some members of the Latino community don’t necessarily use the term “Hispanic” because it can be offensive to some Latinos.

Pitti explained that the term “raises up the idea that these groups are united by some common Spanish past, and it eliminates from view the fact that so many of these communities are in communities that trace their histories to much more complicated, often bloody stories and pasts.”

Pitti said that even the name of the month itself, Hispanic Heritage Month, is something that can be worked on, since it doesn’t seem to fully represent all groups of Latinos.

“People have long said that the very name, Hispanic Heritage Month, both eliminates the complexity of these communities and also downplays the political thinking and the kind of cultural priorities of people in these communities,” Pitti said.

With different life experiences, cultures and histories, some Latinos prefer to use their demonym as a way to identify themselves and their place of origin.

Whether Hispanics come from the islands of the Caribbean or the grounds of South America, they each share one thing in common: their language.

For example, Mexicans, Puerto Ricans, Guatemalans, Central Americans and Dominicans are all Latinos and speak Spanish — even though they are from completely different parts of the world.

And with the elections slowly approaching, many politicians often use the month as a way to secure the Latino vote. The often-trendy celebration is usually used as a marketing technique for politicians and presidential candidates alike to favor Latino voters. As of 2019, there were over 60 million Latinos in the U.S., according to the Pew Research Center. An estimate from the U.S. Census Bureau shows that in 2060, this number could nearly double, reaching over 111 million. This year, Latinos are the largest minority.

“I see why Hispanic Heritage Month is a good opportunity for politicians to make their appeal to Latinos,” Cadava said. “It comes just a month before the election, so it’s when people’s minds are already focused on outreach and campaigns and voting and things like that. So, that makes sense, but the downside is that it often makes Latinos feel like, ‘You don’t care about anything but our vote for four years and then all of a sudden you come around a couple months before the election and expect us to support you."”

“What I wish is that politicians didn’t see Latinos only as voters, that they understood us as Americans who are integral to the U.S., and have been for a long time,” Cadava added. “And I wish that in some ways there weren’t a need for something like Hispanic Heritage Month because we would be recognized, every day, all year long, every year.”

Hispanic Heritage Month started in 1968 as an idea from politicians, leaders and activists to recognize Latinos and their roots.

It started as a week-long activity under President Lyndon Johnson. The celebration was later expanded into a 30-day period, from Sept. 15 to Oct. 15. Hispanic Heritage month became Public Law (100-402) on Aug. 17, 1988 and since then has been celebrated every year.

“I think the idea is that if you can acknowledge us during one month you can recognize us as one group of Americans, but not as Americans, you know? And so I just wish that we were considered integral Americans from the beginning and that we didn’t have to be ‘other’ by creating a month for us,” Cadava said.

Both educators said that while many so-called Hispanics prefer to call themselves Latinos or Latinxs — because of the inclusivity of the term — the celebratory month is still a great opportunity to shed light on the ongoing issues the Latino community faces every day.