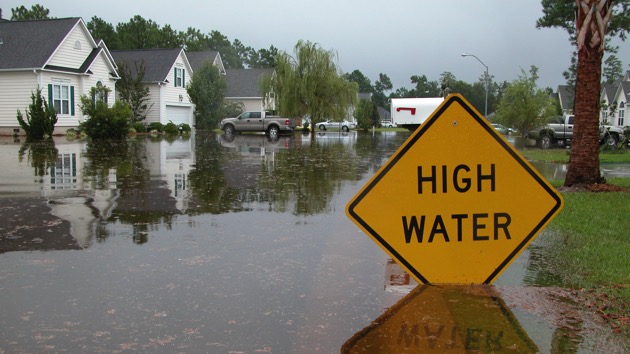 (NEW YORK) — Henri continues to churn across the northeastern United States after weakening from a tropical storm to a tropical depression.

The storm made landfall as a tropical storm in Rhode Island early Sunday afternoon, bringing wind gusts up to 70 miles per hour and a storm surge of up to 4 feet to the surrounding regions.

The system weakened to a tropical depression on Sunday night and is expected to move northwest from upstate New York to southern Vermont on Monday.

Dangerous storm surge, hurricane conditions and flooding rain will continue in parts of the Northeast.

The White House announced Monday that President Joe Biden has approved an emergency declaration for Vermont due to Henri, following his previous approvals for New York, Connecticut and Rhode Island.

Biden ordered federal assistance to supplement state and local response efforts in Vermont due to the emergency conditions resulting from the storm. The move authorizes the Federal Emergency Management Agency (FEMA) to coordinate all disaster relief efforts and provide appropriate assistance for required emergency measures, according to a press release from the White House.

Henri continued to dump rain across the Northeast on Monday morning, as the storm’s remnants stalled in eastern New York.

Flash flood watches remain in effect for eight states in the region, from Pennsylvania to New Hampshire. The area could see an additional 2 to 3 inches of rainfall on Monday, according to the National Weather Service.

What’s left of Henri is forecast to move east later Monday before heading out of the Northeast by Tuesday.

More than 53,000 customers across two states were still without power early Monday morning as Henri slowly moved over the New England area.

As of 5 a.m. ET, there were 44,104 customers without power in Rhode Island, where Henri made landfall, while 9,737 were without power in Connecticut, according to data collected by PowerOutage.US.

Henri continued to weaken Sunday night and is now downgraded to a tropical depression, according to the National Hurricane Center.

The storm is now located 10 miles southwest of Hartford, Connecticut and has sustained winds of 35 mph.

The National Hurricane Center warned that the storm will continue to produce heavy rainfall and flooding across portions of southern New England and Northern mid-Atlantic states through Monday.

National Grid said it is deploying over 4,000 personnel in Rhode Island and Massachusetts to restore power to affected areas.

As of 5 p.m. Sunday, approximately 72,600 customers in Rhode Island and 8,500 in Massachusetts were without power, according to the utility.

The utility said it estimates to have power restored to all affected customers by mid-week.

‘Dire situation’: Kayaker who helped in Kentucky flood rescues on difficult recovery ahead