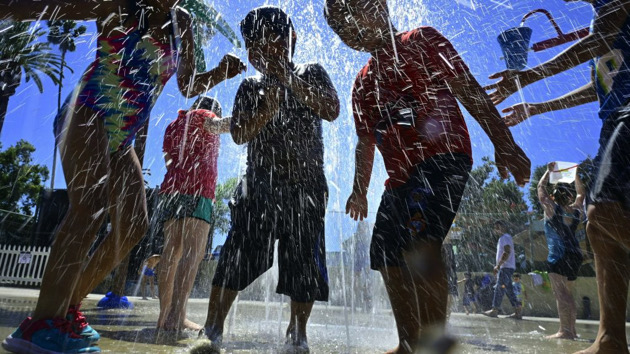 (NEW YORK) — A third of the U.S. population will experience heat advisories on Tuesday and Wednesday as a week of record-breaking temperatures continues, according to the National Weather Service.

A “heat dome” is expected to bring triple-digit temperatures to portions of the Midwest, adding to the early onset temperatures already baking the Southwest.

From California to Virginia, approximately 100 million Americans are under heat advisories, heat warnings or heat watches.

St. Louis reported a record-high temperature of 100 degrees on Monday, and the heat index in parts of the Midwest neared 115 degrees.

From Raleigh, North Carolina, to Chicago, actual temperatures are expected to reach near 100 degrees on Tuesday.

As extreme heat has persisted in the Southwest and Midwest, the heat is moving East, with Detroit predicted to reach 97 degrees on Wednesday.

Wildfires are continuing in the Southwest amid the heat, igniting due to gusty winds and very dry conditions.

There are red flag warnings across Colorado, New Mexico, Texas and Oklahoma for increased fire danger.

A new heat wave is poised to hit the Southwest on Wednesday, with temperatures again surpassing 110 degrees from Southern California to Arizona.

Gusty winds are expected to continue, prolonging wildfire risks in the Southwest.

More than 27 major cities tied or broke day-of heat records on Saturday, with California’s Death Valley being the hottest place in America at 123 degrees.

Palm Springs, California, and Phoenix followed, tying at 114 degrees, marking the hottest day for Phoenix in a century.

Las Vegas reported temperatures of 109 degrees on Saturday for the first time since 1956.

Extreme heat causes more deaths in American than any other weather-related disaster, with the Environmental Protection Agency estimating that more than 1,300 deaths per year in the U.S. are due to extreme heat.

Warning signs of a heat episode include nausea, excessive sweating and rapid pulse.

Those who are at the greatest risk for a heat-related incident include young children, older adults, pregnant women and immunocompromised individuals.

If possible, the NWS encourages residents to take cool showers or baths, find pools to escape the heat, avoid physical activity during the daytime and high-heat hours and find a safe place with air conditioning.