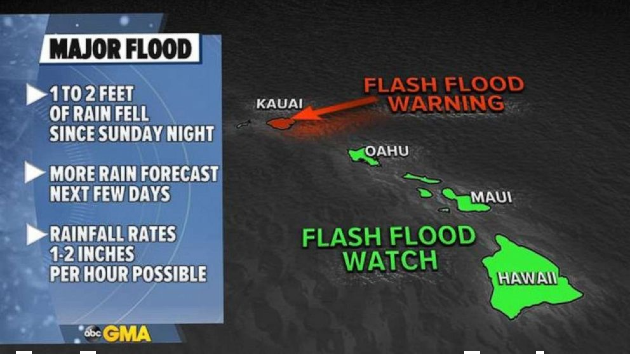 (NEW YORK) — Hawaii has experienced very heavy rainfall since Sunday, with some areas getting 1 to 2 feet of rain in just 24 hours.

The rain caused catastrophic flooding for Maui and Oahu, which temporarily forced evacuations overnight in Haleiwa on Oahu.

The Haleiwa evacuation order was canceled early Wednesday after flooding conditions subsided. All roads in the area are now open, but residents are being asked to proceed with caution as ponding water, mud and debris may be present, officials said.

Flooding in the state led Gov. David Ige to sign an emergency proclamation.

“The emergency proclamation makes state general funds available that can be used quickly and efficiently to help those impacted by the severe weather, which is expected to continue until Friday,” Ige said in a statement Tuesday.

Additional rain is expected Wednesday, when 1 to 2 inches per hour are possible.

Rain could linger in Hawaii for a few days to come, which could result in more flooding.

Meanwhile, there are two storms from California to the Great Lakes with heavy snow, rain and severe thunderstorms worth tracking.

The first storm on the West Coast will bring 1- 2 feet of snow to California and heavy rain to Southern California, with up to 2 inches possible.

The second storm, will move into the Plains and the Upper Midwest. Severe thunderstorms will be possible from Kansas to Minnesota, with damaging winds, hail and even a small chance for tornadoes.

Further northwest, heavy snow is expected from the Dakotas to northern Minnesota, where locally 10 inches of snow is possible.