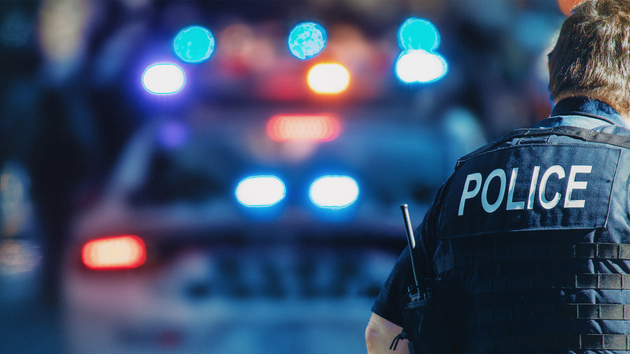 (MT. LEBANON, Pa.) — A horrific eruption of violence unfolded early Thursday in a Pennsylvania town when a 25-year-old man called police saying he killed his parents and wanted to surrender but then started a gunfight when officers arrived at his family’s home, authorities said.

The deadly episode occurred in the Pittsburgh suburb of Mt. Lebanon. When it was over, the suspect was found dead and with a gunshot wound following a high-speed police chase that ended in a crash, police said.

Two officers were injured in the encounter, including one who was shot, officials said.

Just after midnight, a 911 dispatcher received a call from a man claiming to have killed his parents during a fight. When officers got on the phone with him, he told them he wanted to surrender, Deputy Chief Jason Haberman of the Mt. Lebanon Police Department said at an early morning news conference.

He said officers arrived at the man’s house about 12:18 a.m. and confirmed both his parents were dead.

“He was very calm with the officers involved. They made phone contact with him. There was no indication he was not going to surrender,” Haberman said.

Haberman said that even after officers initially arrived at the man’s home, “there was no indication that he was going to turn this into a gunfight.”

Without warning, the man, whose name was not immediately released, pulled a gun and started shooting at officers, hitting one from the neighboring Dormont Police Department, who was taken to a hospital and treated for non-life-threatening injuries, Haberman said.

Haberman said a second officer from the Mt. Lebanon Police Department suffered an unspecified non-shooting injury during the encounter and was treated at a hospital and released.

Officers from surrounding agencies set up a perimeter around the gunman’s home, but the suspect somehow managed to get in a vehicle and breach the perimeter, Haberman said.

Haberman said officers were chasing the man south on Route 19 when he crashed. He said officers found the man dead in his vehicle and with a bullet wound.

Haberman said the man was not shot by police. He said Allegheny County police are investigating how the man was shot and whether that or the crash killed him.

The names of the suspect’s parents were also being withheld, pending notification of relatives.

Haberman said Mt. Lebanon police had prior contact with the suspect and had gone to the family’s home before to investigate reports of domestic violence.

“Thanks to the heroic acts of a number of officers involved and the assistance of a number of jurisdictions,” Haberman said, “injuries were minimized and lives were saved.”