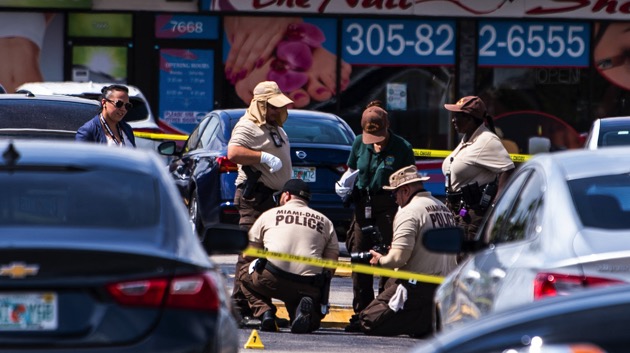 (MIAMI) — A Florida mayor is begging the public to help “get these killers off the streets” after a mass shooting outside a banquet hall in suburban Miami.

Twenty-three people were shot, including two fatally, early Sunday morning at the El Mula Banquet Hall in Hialeah, Florida, where a local rapper was celebrating his birthday.

The father of one victim interrupted Monday’s news conference. Clayton Dillard could be heard shouting, “killed my kid” and “killed my son!”

As the grieving father was escorted away, Miami-Dade Police Director Freddy Ramirez told reporters, “That’s the pain that affects our community right there.”

Police said they believe the shooting — carried out by three gunmen — was motivated by an “ongoing rivalry” between two groups.

The gunmen waited outside of the banquet hall for about 40 minutes and then opened fire on patrons as they left, Ramirez told ABC News on Sunday. Some patrons returned fire, Ramirez said, and over 100 shell casings were found at the scene.

Miami-Dade County Mayor Daniella Levine Cava vowed to “use every resource available to bring these people to justice.”

The mayor also addressed gun violence more broadly, noting that over 30 people were shot this weekend.

“We must break the cycle of violence,” she said. “Gun violence is an epidemic and the pandemic has intensified it.

Authorities said the gunmen in Sunday morning’s shooting were driving a white Nissan Pathfinder. The reward for information has climbed to $130,000, according to Miami-Dade Crime Stoppers.