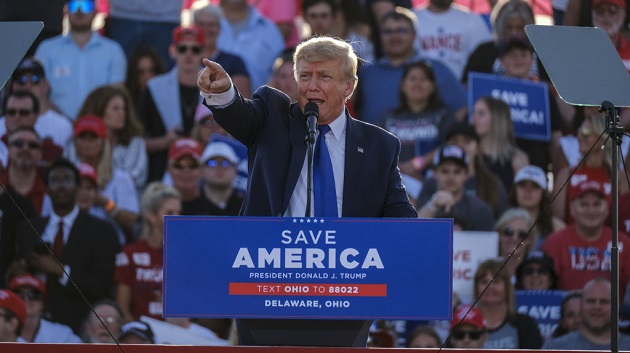 (NEW YORK)  — A special grand jury that had been hearing evidence in the criminal investigation into former President Donald Trump expires at the end of the week and will not be extended, sources familiar with the matter confirmed to ABC News.

The special grand jury was empaneled last fall, but had stopped hearing evidence once Alvin Bragg became district attorney in Manhattan in January, raising questions about the strength of the case and whether prosecutors had amassed all the elements required to prove it.

The two senior prosecutors who had been leading the investigation, Mark Pomerantz and Cary Dunne, resigned in February. Pomerantz said in his resignation letter he believed Trump “is guilty of numerous felony violations.”

The district attorney’s office declined to confirm or deny the decision not to extend the special grand jury, which was first reported by CNN. Grand juries can always be called upon to hear evidence and weigh the return of an indictment and a new special grand jury could always be empaneled.

A spokeswoman for Bragg declined to comment and instead pointed to a statement the district attorney issued earlier this month that insisted the criminal investigation remained active.

“The team working on this investigation is comprised of dedicated, experienced career prosecutors. They are going through documents, interviewing witnesses, and exploring evidence not previously explored,” Bragg said in a statement said earlier this month. “In the long and proud tradition of white-collar prosecutions at the Manhattan D.A.’s Office, we are investigating thoroughly and following the facts without fear or favor.”

The district attorney’s office fought successfully for access to Trump’s personal and business tax returns as part of the investigation into how he valued his assets. The New York attorney general is conducting a parallel civil investigation.

The case has already resulted in tax charges against the Trump Organization and its chief financial officer Allan Weisselberg over perks paid to certain executives. Each has pleaded not guilty.