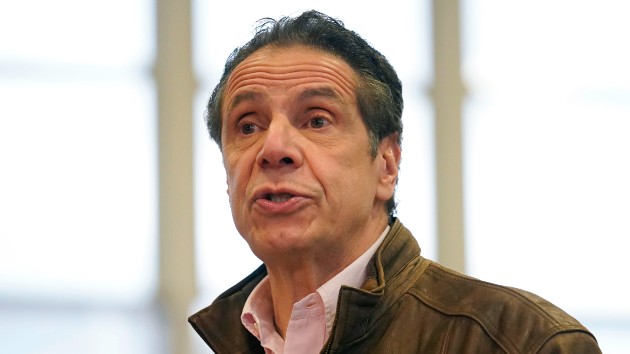 “The time has come. The Governor must resign,” Rice, a former district attorney, tweeted Monday night.

Rice was once a close ally of Cuomo’s. In the 2010 race for state attorney general, Rice was widely believed to be Cuomo’s preferred pick for the role, but he ended up endorsing her opponent, Eric Schneiderman, right before the primary. In 2013, Rice was appointed by Cuomo as one of the three-co-chairs of the Moreland Commission to look into public corruption. She stepped down one year later after announcing her run for Congress.

Rice joins a number of Democratic lawmakers from the state’s legislature denouncing Cuomo’s actions in wake of the third accusation.

On Monday evening, the New York Times published an account from Anna Ruch that alleged Cuomo placed his hands on her bare lower back and face during a wedding reception in New York City in September 2019 and “asked if he could kiss her.” A photo at the time of the alleged incident was taken and shared with the paper.

She said the incident left her “uncomfortable and embarrassed” and she felt she “didn’t have a choice in that matter.” Cuomo ended up kissing her on the cheek, according to Ruch.

Ruch’s account comes after two former state employees who worked for Cuomo, Lindsey Boylan, 36, and Charlotte Bennett, 25, came forward over the past week with allegations of sexual harassment against the governor.

Cuomo has denied the sexual harassment allegations from Boylan and Bennett. When Cuomo’s office was asked by the Times about Ruch’s allegations on Monday, his office referred to his Sunday night statement, in which he claimed some of the things he has said “have been misinterpreted as an unwanted flirtation.”

After Ruch’s story was published, Bennett came out in support of Ruch.

“I stand with Anna Ruch. Anna — I hear you, I see you. I’m so sorry. His inappropriate and aggressive behavior cannot be justified or normalized. Thank you for your courage and strength. Here for you always,” Bennett tweeted Monday.

New York Attorney General Letitia James announced on Monday that her office would begin an independent investigation, which included subpoena power, into allegations of sexual harassment against the governor. James’ office told ABC News Monday evening it read Ruch’s account in the Times and will decide whether to incorporate it into the just-launched investigation.

Six Democratic state lawmakers on Tuesday morning called for Cuomo to be impeached. In a statement shared with ABC News, the lawmakers said Cuomo used his power to “belittle, bully and harass his employees and colleagues” and impeachment proceedings “are the appropriate avenue” for accountability. It further states Cuomo’s withholding of information in regards to nursing home deaths is “sufficient to justify impeachment proceedings.”

State Sen. John Liu didn’t call for Cuomo to step down directly, but condemned his actions.

“A person who treats women this way is not fit to govern,” Liu said.

Republican New York Rep. Claudia Tenney accused Cuomo of having a corrupt “pattern” and accused him of hiding the number of nursing home COVID-19 deaths in the pandemic.

An investigation is underway by the FBI and federal prosecutors into the governor’s coronavirus task force with a focus on the handling of nursing homes in the early days of the coronavirus crisis, two sources familiar with the matter told ABC News. A probe by the New York attorney general’s office found the number of state nursing home resident deaths from the virus may have been undercounted by as much as 50%. The report said many of those patients died after being moved to the hospital and were not counted as nursing home fatalities.

Cuomo conceded his handling of nursing home fatality data created a “void” that became filled by misinformation and conspiracy theories — but he declined to apologize.

“The void we created by not providing information was filled with skepticism and cynicism and conspiracy theories which fueled the confusion,” Cuomo said during a news conference Monday. “The void created disinformation and that caused more anxiety for loved ones.”