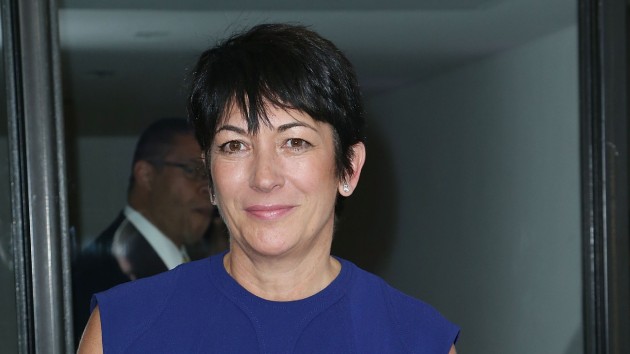 (NEW YORK) — Lawyers for Ghislaine Maxwell are accusing guards at a federal detention center of improperly confiscating and reviewing her legal documents after she met with her lawyers at the facility over the weekend, according to a letter Monday to the federal judge overseeing Maxwell’s criminal case.

“Ms. Maxwell observed three guards going through the [folder], reading papers and pages of the notebook, dividing papers into two stacks, and leaving the room with the papers,” wrote Bobbi C. Sternheim, one of Maxwell’s criminal lawyers, in the letter to U.S. District Judge Alison Nathan.

Maxwell’s lawyers said guards then “intimidated Ms. Maxwell” by standing “knee to knee” over her as she used the bathroom, and threatening her with a disciplinary infraction, the letter states.

The latest dispute over the conditions of Maxwell’s confinement at the Metropolitan Detention Center in Brooklyn, New York began on Saturday, one day after she pleaded not guilty to an eight-count superseding indictment alleging she aided and conspired with convicted sex offender Jeffrey Epstein in the sexual abuse of four minors between 1994 and 2004.

Staff at the jail informed Maxwell’s lawyers after the visit that she had violated policy by receiving paperwork from her attorneys that was not in her possession when she entered the visiting area, according to an email from the facility’s legal counsel attached to Sternheim’s letter.

Sternheim called that allegation “inaccurate” and noted that Maxwell and her lawyers were “under the constant watch of four to five guards” with a portable camera and fixed surveillance cameras recording the two-and-a-half-hour visit.

“At no time did the guards, who were assiduously watching and filming the legal conference, bring any concern to my attention,” Sternheim wrote. “The conduct of which both Ms. Maxwell and counsel have been accused did not happen; and the conduct on the part of the guards was reprehensible.”

The institution’s visitation policy allows detainees to bring materials to a legal meeting that were previously received in the mail, but does not permit carrying out any additional items.

“The contents of legal material will be visually scanned, but not read by staff,” the policy states.

Maxwell’s attorneys are threatening legal action over the alleged incident and sent a letter to the facility’s lawyer demanding that all video and notes surrounding the Saturday visit be preserved.

The documents in question were returned to one of Maxwell’s lawyers on Sunday, but Sternheim claimed that it is “unknown whether any seized documents were retained or copied by the MDC.”

Federal prosecutors in Manhattan declined to comment on Sternheim’s letter.

The Bureau of Prisons did not immediately respond to an inquiry from ABC News.

Earlier Monday, another attorney for Maxwell, David Markus, argued before an appeals court panel that Nathan erred in rejecting Maxwell’s three attempts to be let out on bail pending trial.

“Ghislaine Maxwell is not Jeffrey Epstein,” Markus said. “For the past 10 months she has been detained in horrific conditions that make it impossible for her to prepare for trial.”

“We just want a fair opportunity, a fair chance, so that she can get ready for the trial of her life,” Markus said.

The appellate judges peppered the government with questions about guards checking on Maxwell every 15 minutes by shining a flashlight in her cell.

“Is she a suicide risk or not? Has [the Bureau of Prisons] concluded she’s a suicide risk? Or is it some other reason why they’re shining lights all night long,” asked one of the judges during oral argument.

“We have not been told that she is a suicide risk,” assistant U.S. Attorney Laura Pomerantz said.

Pomerantz said Nathan, “is aware of the circumstances under which this defendant is confined” but denied Maxwell release on bail because she thinks she is a flight risk.

The appellate judges asked the defense about Maxwell’s “ties to foreign countries” and her “significant financial resources.”

The defense pointed out Maxwell has offered to renounce her foreign citizenships in England and France and to put her assets of more than $20 million into a monitored account.

“I’m not sure what else she can do to demonstrate she’s not a risk,” Markus said.

The three-judge panel took the arguments under advisement, but there was no immediate ruling.

Maxwell’s trial is currently scheduled to begin on July 12. Her lawyers have asked the court to postpone until the fall or winter to allow them time to investigate and prepare for the allegations in the superseding indictment, which added two new charges and a fourth alleged victim.

The government opposes the delay, citing, among other reasons, the stress on the alleged victims ahead of the trial.

Nathan indicated in a hearing on Friday that she would decide soon whether to grant the defense’s request.