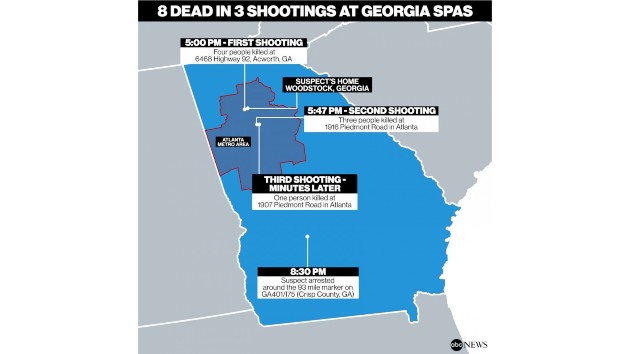 (ATLANTA) — Authorities investigating the eight homicides at Atlanta-area spas have determined that the killings were likely a “targeted attack driven by personal grievance,” according to a source briefed on the probe.

Detectives and analysts are still trying to piece together suspect Robert Long’s motive and say that the work is both complicated and critical in order to understand what happened, how it played out and why.

Long, 21, was taken into custody hours after the Tuesday shootings which took place at three different locations: one in Cherokee County and two in Atlanta.

Six of the eight killed were Asian women, and the crimes came amid a rise in anti-Asian American and Pacific Islander hate crimes across the nation.

Investigators familiar with mass-casualty incidents believe it is likely the spa killings mark yet another case where the motivators “don’t fit into neat buckets.” In other words, investigators now believe there were multiple motivators that led both to the attack and the targets selected.

There is no concrete evidence supporting the idea that the locations and victims were targeted because of their ethnicity, but investigators are actively trying to determine what, if anything, the suspect might have said, written or thought about Asians or Asian women, in particular.

Detectives believe the locations were certainly the intended targets and are now trying to figure out if the women were specifically targeted, if the suspect had had any direct interactions with them and what, if anything, had transpired previously.

Hampton said Thursday, “We are looking at everything to make sure that we discover and determine what the motive of our homicides were.”

Long is charged with eight counts of murder. Long waived his first court appearance, according to his attorney, J. Daran Burns, who was appointed to represent Long by the Cherokee County Office of Indigent Defense on Wednesday.