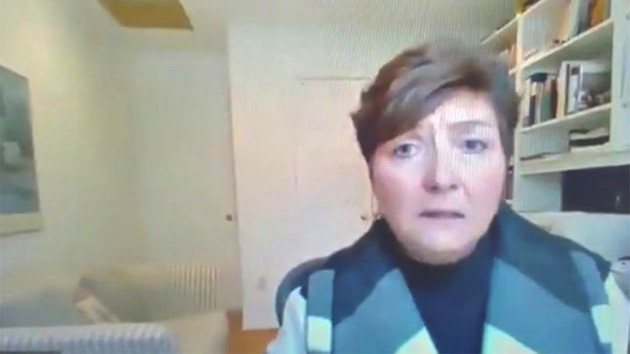 (WASHINGTON) — A Georgetown Law School professor has been terminated after comments she made about a lot of her “lower” students being Black went viral and sparked a firestorm of backlash on social media.

In a recording of the video call, adjunct professor Sandra Sellers is speaking to a fellow adjunct about students’ evaluations and performance.

“And you know what, I hate to say this, I end up having this angst every semester that a lot of my lower ones are Blacks. Happens almost every semester,” Sellers said. “And it’s like, ‘Oh, come on.’ You get some really good ones, but there are also usually some that are just plain at the bottom. It drives me crazy.”

Bill Treanor, the dean of the law school, said in a statement Thursday that he was “appalled that two members of our faculty engaged in a conversation that included reprehensible statements concerning the evaluation of Black students.”

Treanor said he gave both professors the opportunity to provide additional context, and then informed Sellers that he was terminating her relationship with the law school effective immediately.

“During our conversation, she told me that she had intended to resign,” Treanor added. “As a result of my decision, Professor Sellers is no longer affiliated with Georgetown Law.”

The dean said that the other adjunct professor on the call, David Batson, has been placed on administrative leave pending an investigation by the school’s Office of Diversity, Equity and Affirmative Action. Until the completion of the investigation, Batson will not have further involvement with the course in which the incident arose, according to Treanor.

“Not only is this situation revealing of Sellers’ true beliefs about Black students, it is also illustrative of the conscious and unconscious bias systemically present in law school grading at Georgetown Law and in law school classrooms nationwide,” the statement added. “The difference is that Sellers was caught and her racism was broadcast for the world to see.”

The BLSA Executive Board released this statement regarding Professor Sandra Sellers’ racist remarks towards Black students at GULC and Professor David Batson's complicity upon hearing those remarks. In the statement, we make explicit demands for the GULC administration. pic.twitter.com/nAx1jDE37G

In a resignation letter obtained by ABC News, Sellers said she was “deeply sorry” for her “hurtful and misdirected remarks.”

“While the video of this incident is an excerpt from a longer discussion about class participation patterns, not overall grades, it doesn’t diminish the insensitivity I have demonstrated,” she wrote. “I would never do anything to intentionally hurt my students or Georgetown Law and wish I could take back my words.”

“Regardless of my intent, I have done irreparable harm and I am truly sorry for this,” Sellers added. “For that reason, I am immediately and voluntarily resigning my position as an adjunct professor.”

She also reflected on her nearly 20 years teaching at Georgetown, saying when her students do not excel in courses she teaches, “it reflects shortcomings on my part, not just on the part of any single student.”

“My comments were the inarticulate reflection of long soul searching. I must do better to understand and address these issues,” Sellers continued. “I am committed to doing this for myself and also looking for ways I can combat racism in the Georgetown community.”