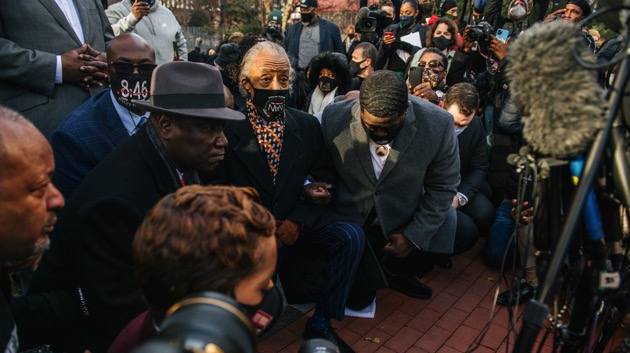 (MINNEAPOLIS) — As the murder trial of former police officer Derek Chauvin took place Monday, George Floyd’s 7-year-old daughter spoke out about the father she will grow up missing.

Gianna Floyd told ABC News that the one thing she wants the world to know is the type of father Floyd was.

“He was kind and he was nice to my momma all the time,” Gianna said, sitting next to her mother, Roxie Washington.

Washington said it has been 307 days since Floyd died while in custody for allegedly using a counterfeit $20 bill buy cigarettes, and ever since, she has had to be both mother and father to her little girl.

“We were friends. He told me everything. We would talk,” Washington said of Floyd. “He always said that I made him the man that he was. But I think it was kind of vice versa: he made me into the woman that I am. I’ve always been like stand up. But the heart that he had, you know, he just had a good heart.”

The mother and daughter spoke with ABC News shortly after Floyd’s brothers, other relatives, the family’s lawyers and hundreds of supporters gathered outside the Hennepin County Courthouse for a news conference before entering the courthouse for the start of the high-profile trial.

Led by the Rev. Al Sharpton, the group joined together in an act they said symbolizes the torture their loved one endured — taking a collective knee and counting down the minutes Chauvin, a former Minneapolis police officer, knelt on the back of Floyd’s neck.

The time was symbolic of how long authorities initially said Chauvin, who is white, had his knee on Floyd’s neck as the 46-year-old Black man repeatedly cried out “I can’t breathe” and begged for his dead mother before going unconscious.

“I am not ready to see the video of my brother being murdered,” she said.

She also weighed in on the defense’s argument that drugs found in her brother’s system caused his death.

“They would find any way possible for this police officer to not look bad. But, the whole world saw what happened to him,” she said. “The drugs that they say they found in his system did not kill him… [it] was the pressure that was kneeled down in his neck. It’s not surprising to me but one thing’s for sure… the world [has] seen how my brother left this world.”

The tense scene outside the courthouse came just minutes before Hennepin County District Court Judge Peter Cahill swore in the jury and opening statements got underway in the case that has drawn attention from around the world and prompted protests across the nation.

But Chauvin’s attorney, Eric Nelson, said in his opening statement the evidence in the case is “far greater than 9 minutes and 29 seconds” and implored the jury to consider all the evidence.

Floyd’s brothers spoke at the news conference, telling people they are bracing for Chauvin’s defense attorney to attempt to denigrate their brother’s reputation to make it seem that he was at fault in his own death on May 25, 2020.

Meanwhile, Derreck Johnson, the president and CEO of the NAACP, released a statement on Monday expressing hope that “justice must prevail.”