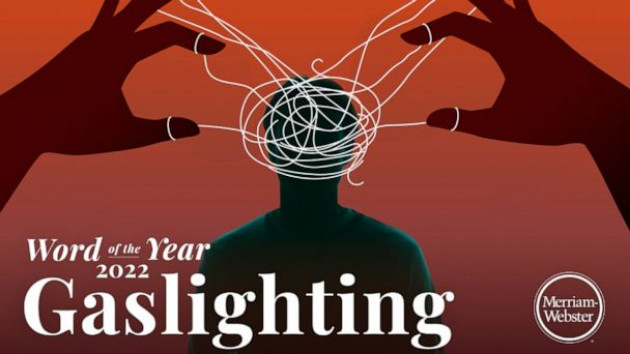 (NEW YORK) — Merriam-Webster defines gaslighting as “the act or practice of grossly misleading someone especially for one’s own advantage.”

Now, the term has been dubbed the 2022 Word of the Year, the oldest U.S. dictionary publisher announced Monday.

“The increase in dictionary lookups for gaslighting is striking,” Peter Sokolowski, Merriam-Webster’s editor at large, said in a statement. “In our age of misinformation — ‘fake news,’ conspiracy theories, Twitter trolls, and deepfakes — gaslighting has emerged as a word for our time. From politics to pop culture to relationships, it has become a favored word for the perception of deception.”

The word has been used in a wide range of contexts from the Jan. 6 committee hearings to reality TV drama on Bachelor in Paradise.

Lookups for “gaslighting” on Merriam-Webster.com increased 1,740% this year.

“On the subject of gaslighting, we do hope you’ll trust us,” Sokolowski said.

Merriam-Webster shares most searched words of 2022

Merriam-Webster shared other standout words that shed light on experiences that shaped this year.

“As always, our dictionary lookups provide a window into the world, and into the topics and ideas that consumed our attention and defined the year,” Sokolowski said.

“Cancel culture” and the related term “woke” were top lookups, “especially in January, when Pope Francis used the term in his yearly address to diplomats from around the world,” Sokolowski stated.

“Omicron” spiked in searches in January when cases of the COVID-19 variant, which was named for the 15th letter of the Greek alphabet, surged. According to Merriam-Webster, it saw another increase in lookups in November when “studies found that the omicron booster was not significantly more effective than the older vaccines.”

In March, “oligarch” was of interest as the “U.S. began placing sanctions on a list of powerful Russian businessmen and their families.”

“Codify” saw a spike in May “leading up to and following the Supreme Court’s decision to overturn Roe v. Wade.”

According to the dictionary publisher, during Pride Month in June the acronym “LGBTQIA” peaked, while later that month “sentient” became a top lookup after “a Google engineer claimed the company’s AI chatbot had developed a human-like consciousness.”

“Loamy,” which is a type of soil according to Merriam-Webster, appeared as a Quordle answer in August, sparking a 4.5 million percent increase in searches.

When the FBI executed a search warrant at former President Donald Trump’s Mar-a-Lago estate in August, the word “raid” was a top lookup.

“Queen consort” was among the top words and phrases searched after Queen Elizabeth II’s death in September. Camilla, the queen consort, who is married to now-King Charles III, the late queen’s eldest child, currently holds that title.