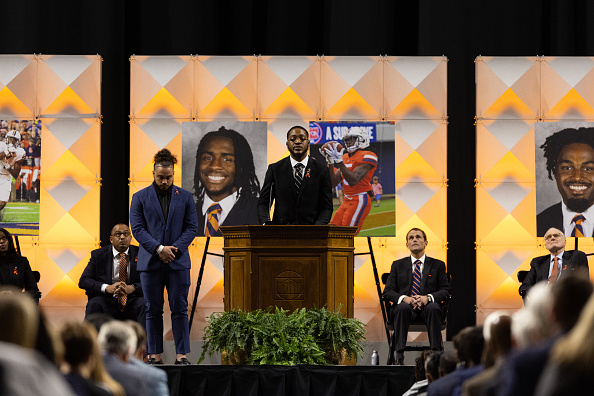 (NORTH CHARLESTON, S.C.) — Family and friends gathered to say their goodbyes to one of the University of Virginia football players who was killed in a mass shooting earlier this month.

The funeral service for Lavel Davis Jr., 20, was held on Wednesday at Mount Moriah Baptist Church in North Charleston, weeks after Davis and two other UVA football players were killed on Nov. 13.

At the funeral, a family member of Davis remembered him, recalling Davis’ relationship with God.

“His athletic and academic accomplishments were enviable. His service to his church and community were admirable and his relationships with his family and friends were legendary,” Clyburn said.

Davis had a big smile that “lights up the room,” UVA football’s head coach Tony Elliott said at a news conference earlier this month. “He’s got a gentleness about him. But he’s passionate about what he believes in.”

The shooting took place on a bus full of students returning home from a class field trip to see a play in Washington, D.C., university officials said.

Davis was a wide receiver from Ridgeville, South Carolina, and was in his third year, university President Jim Ryan said at a Nov. 14 news conference.

University of Virginia sophomore Ryan Lynchtold ABC News that she was on the bus at the time of the shooting and was close with Davis, Chandler and Perry, who were also her classmates.

Lynch said she wanted Davis Jr.’s family to know he wasn’t alone in his final moments.

“One of us was with them after they were shot and we loved them so much,” she told ABC News earlier this month.