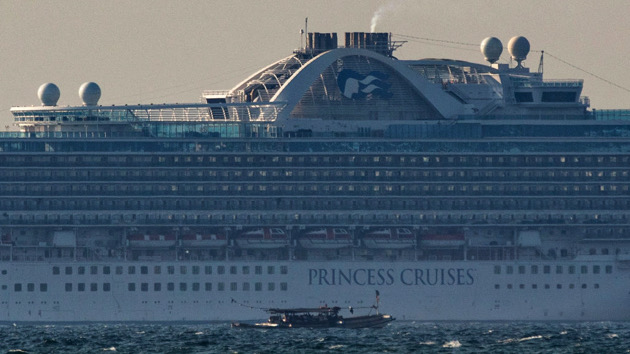 (SAN FRANCISCO) — A Princess Cruises ship arrived in California Sunday with multiple passengers and crew members aboard who tested positive for COVID-19.

The company’s ship, the Ruby Princess, docked in San Francisco after a 15-day Panama Canal cruise.

Everybody aboard the ship was fully vaccinated and had to provide proof of a negative COVID test before boarding.

The spokesperson would not disclose how many guests and staff tested positive but said all the cases were either mild or asymptomatic.

“As with all Princess itineraries, this cruise is operated as a vaccinated cruise, as defined by the Centers for Disease Control and Prevention. Guests and crew vaccination rates were at 100%,” a statement read. “During the cruise we identified some positive COVID-19 cases amongst our guests and crew members. They were all asymptomatic or only mildly symptomatic and were isolated and quarantined while monitored and cared for by our shipboard Medical team.”

The cruise line said guests who tested positive and did not complete the isolation period by the time the ship docked would “either return home via private transportation or were provided with accommodations ashore to hotels coordinated in advance for isolation and quarantine.”

Later on Sunday, the ship departed on its following voyage, a 15-day cruise to Hawaii, the spokesperson said.

During the height of the omicron wave, the CDC classified cruise ships as Level 4, the highest level and meaning “very high” health risk.

On the CDC’s Cruise Ship Status Dashboard, it states the federal health agency has started an investigation of the Ruby Princess due to the number of reported cases and that the ship “remains under observation.”

The dashboard did not state how many cases were reported on the shop and the CDC did not return ABC News’ request for comment.

However, the ship was color-coded orange on the CDC dashboard, meaning at least 0.3% of total passengers and/or crew tested positive for the virus.

This is the second time since the beginning of 2022 that the Ruby Princess has docked in San Francisco with COVD-infected passengers aboard.

In early January, the ship arrived in The Golden City from a 10-day Mexico cruise with 12 cases of COVID-19 among passengers.

The cases were found after a quarter of the passengers were randomly tested for the virus.

The cruise industry was badly hit when the COVID-19 pandemic first struck. Destinations closed ports to ships and passengers were not able to leave once for several days after ships docked.

Two of Princess Cruises’ ships experienced some of the first known outbreaks. In February 2020, the Diamond Princess reported an outbreak as it docked in Yokohama, Japan.

A few weeks later, in March 2020, passengers tested positive on the Grand Princess ship as it traveled between California, Mexico and Hawaii.