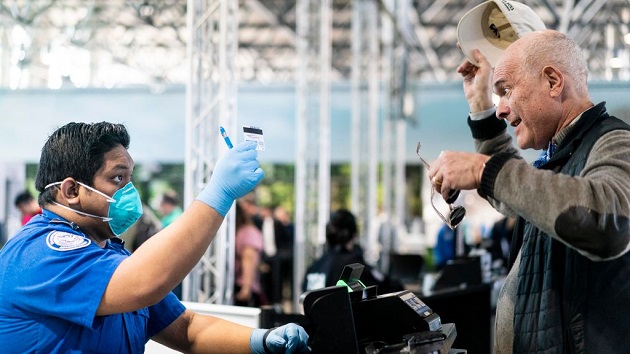 (NEW YORK) — For nearly a year, the job duties of aviation employees on the front lines including contact with travelers, crossing state lines and working in close proximity, have become more perilous amid a global pandemic.

“The nature of our work and our facilities don’t allow for social distancing,” Jenny Benjamin an air traffic controller at the Denver/Centennial Tower said. “I work in a small round tower about 14 feet across. At times there are almost ten people in that small space.”

Travel has always been deemed essential during the pandemic, but for those in the industry getting a vaccine remains elusive.

Joe Shuker has been screening thousands of people every day, patting them down, at the Philadelphia International Airport, since the pandemic began. The agency has been hit particularly hard, reporting almost 6,500 positive COVID-19 cases since March.

The local Transportation Security Administration union president has been fighting to get himself and his 700 coworkers vaccinated.

This week their fight became more personal after losing one of their own, a 41-year-old TSA officer.

“If the vaccine was available to us I think he would probably be alive today,” Shuker said the day after his coworker’s passing. “Everybody’s anxious, but with somebody passing away, you could see it became real yesterday for a lot of the workers.”

In early January, Shuker received an email from the Department of Homeland Security saying that he was eligible for the COVID-19 vaccine. Shuker signed up for the Brooklyn site, willing to make the two-hour drive to receive the vaccine.

But he was unable to complete his registration, receiving an email from DHS citing the fact that he was more than 200 miles from their list of eight vaccine administration centers nationwide.

Since then he said he hasn’t heard anything from his employer, and there are still no eligible vaccine hubs in Pennsylvania.

“We’re all concerned on when we’re going to get it,” he said, “And no news is a giant concern. We haven’t heard anything about it.”

‘They just don’t have enough supply’

Federation of Government Employees policy director Jacqueline Simon said since President Joe Biden took office the administration is trying to expand the number of vaccination hubs, but that hasn’t happened yet.

“They just don’t have enough supply,” she said. “It’s not a criticism of the VA or even DHS at this point, it’s supply.”

Shuker has now been left to fend for himself, combing through different union Facebook pages for leads, signing up on different county sites, but he has not received any calls back.

“I get it, we’re not doctors and nurses, I know our place in the line,” he said. “But there’s no reason for us to be dead last on this, right?”

Airline employees have not been granted any federal priority vaccine status. Some states have prioritized public transportation employees, but it’s been unclear if that extends to air travel.

U.S. airlines have been pushing federal and state authorities to move their employees closer to the front of the line since December.

Sources at major U.S. airlines said the majority of their employees that have received one or two shots were over the age of 65, similar to the rest of the country.

Delta CEO Ed Bastian revealed in a memo last week that only 690 Delta employees out of their 75,000 had received at least one vaccination shot.

United Airlines is one of the few companies that has made the case for mandatory employee vaccinations, if they can work out the logistical challenges.

“I think the right thing to do is for United Airlines, and for other companies, to require the vaccines and to make them mandatory,” United CEO Scott Kirby said during an employee town hall last month. “If others go along and are willing to start to mandate vaccines, you should probably expect United to be amongst the first wave of companies that do it as well,” he said.

Experts say beyond the fact that it’s hard to get, mandating the vaccine for at least the next several months is unlikely because it is still technically an investigational product that has received emergency authorization, not full approval.

In an internal note to employees obtained by ABC News, United urged their employees to get the vaccine as soon as possible: “If the opportunity arises to get vaccinated in your county or state – take it! Don’t wait for guidance from United.”

Sara Nelson, both a current flight attendant and president of the Association of Flight Attendants-CWA, AFL-CIO, called on lawmakers Thursday to implement a federal vaccination program for front-line aviation workers.

Nelson believes the federal government should set up vaccination clinics at major U.S. airports, adding that state programs are “inconsistent in how they prioritize the vaccination for crew members.”

access to vaccinations is particularly urgent, given the emerging threat of new viral strains,” Nelson said in her opening statement in front of the House Transportation and Infrastructure Committee. “Flight attendants, in particular, have contact with a large number of people every day, typically crossing state lines, putting them at increased risk of infection.”

Vaccines could be offered to American’s staff in Chicago as soon as this month, although the airline is still working out plans and cautions that timing remains fluid as the situation continues to evolve.

It is likely they will offer shots to employees at their clinics in airport hubs.

Delta Air Lines is transforming Concourse C of the Atlanta Airport into a vaccination center.

On Friday, a Delta spokesperson confirmed Delta will offer vaccinations to Georgia employees who are 65 and older starting on Monday.

The airline hopes to offer more in-house vaccines to employees as they become eligible.