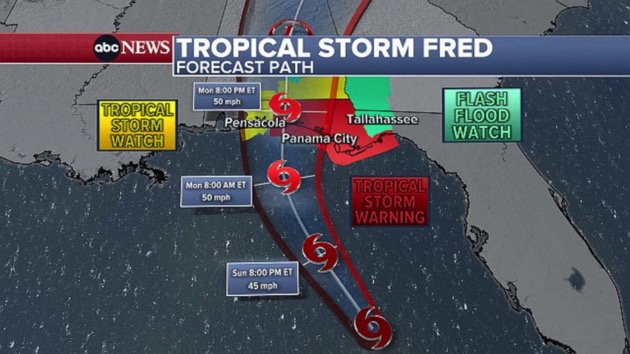 (NEW YORK) — The remnants of Fred redeveloped into a tropical storm over the southeastern part of the Gulf of Mexico earlier Sunday morning.

Tropical Storm Fred has maximum sustained winds of 40 mph, is moving to the north-northwest at 10 mph and the center is currently about 235 miles south of Panama City, Florida.

A tropical storm warning has been issued for parts of the Florida Panhandle, from Navarre to the Wakulla/Jefferson County line. Parts of Florida, including Panama City, Pensacola, and southeastern Alabama are under a tropical storm watch.

As Fred continues to move across the open waters of the eastern Gulf of Mexico, scattered thunderstorms will be possible across parts of Florida throughout the day. The main impacts from Fred are expected on Monday.

Fred will likely strengthen more before closing in on the Florida Panhandle on Monday.

Heavy rain and gusty winds will begin to impact the state Monday morning, with the brunt of the impact arriving in the afternoon ahead of a likely landfall Monday evening along the panhandle. Over a half-foot of rain is possible in spots, with flash flooding and storm surge impacts possible during high tide.

Fred will rapidly weaken after landfall and then bring areas of heavy rain into parts of Alabama and Georgia through Tuesday morning. Flash flood watches are also in effect from Tallahassee, Florida, up into portions of southern Alabama and Georgia.

Meanwhile, Tropical Storm Grace currently has maximum sustained winds of 35 mph and is moving west-northwest at 15 mph. The center is about 200 miles east-southeast of Santa Domingo, Dominican Republic. Grace remains disorganized as it moves just south of Puerto Rico.

Grace is forecast to impact Hispaniola Monday into Monday night, bringing torrential rain across the Dominican Republic and eventually parts of Haiti with over a half-foot of rain, flash flooding and mudslides possible in spots.

Grace will then likely move into the Gulf of Mexico, however, there remains a great deal of uncertainty, so the track possibilities could range from Mexico’s Yucatan Peninsula to the U.S. Gulf Coast.