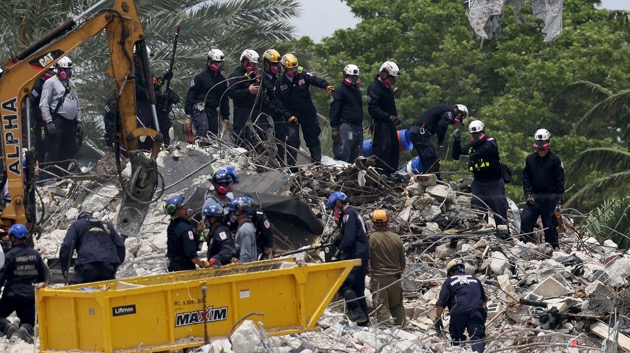 (SURFSIDE, Fla.) — Search and rescue teams have recovered four additional bodies in the pile of rubble from a collapsed building in Surfside, Florida, following the demolition of the remaining building, according to officials.

First responders were able to search in areas previously inaccessible due to the instability of the portion of Champlain Towers South that still stood following the partial collapse on June 24, Miami-Dade County Mayor Daniella Levine Cava told reporters at a press conference Monday morning.

Three bodies were recovered in the morning and an additional body was found in the afternoon, according to officials.

The death toll now stands at 28, with 117 still unaccounted for, Levine Cava said. The newly accessible areas were likely where a lot of the master bedrooms were located, where people were sleeping, Florida Gov. Ron DeSantis told reporters.

While the demolition was critical to expanding the search for bodies closer to the standing building, it was also necessary as Tropical Storm Elsa approached the U.S. with winds that “could have brought it down in a matter that could not have been as controlled or predicted,” the mayor said.

The demolition went “exactly as planned,” and the building fell away from the pile that collapsed, Levine Cava said.

“Only dust landed on the existing part,” she said.

Crews received the “all-clear” about an hour after the demolition started around 10:30 p.m. Sunday, and first responders resumed the search by 1 a.m.

Levine Cava emphasized that search and rescue crews “took every action we possibly could” to search for pets that remained in the building prior to the demolition. Multiple full sweeps of the building, which included searches in hiding places such as closets and under beds, were conducted “at great risk to first responders,” the mayor said.

In areas of the building that were not accessible, ladders were used to place live animal traps on balconies, and doorways were opened to give pets the means to escape if they were able to, Levine Cava said. Drones with thermal imaging were also used.

“We went to truly great lengths to take every step that we could,” she said.

Levine Cava described the decision to collapse the entire apartment building as “devastating,” acknowledging the “great tragedy” for the surviving residents of the building, in addition to those who lost loved ones.

“To lose your home and all your belongings in this manner is a great loss as well,” she said.

Officials said it was too dangerous for survivors to enter the building to retrieve their belongings, DeSantis said.

“Obviously it wasn’t worth that risk,” he said. “We can not lose any more people.”

FEMA has been successful in signing families up for assistance, and the city has raised millions of dollars from donations around the world to assist survivors as well, Levine Cava said.

Although the forecast for Tropical Storm Elsa has the center of the storm on the west coast of Florida, there will still be intermittent heavy rain and localized flooding as well as strong gusty winds and the possibility of tornadoes in the region, which could still affect search efforts, said Robert Molleda, warning coordination meteorologist for the National Weather Service South Florida.