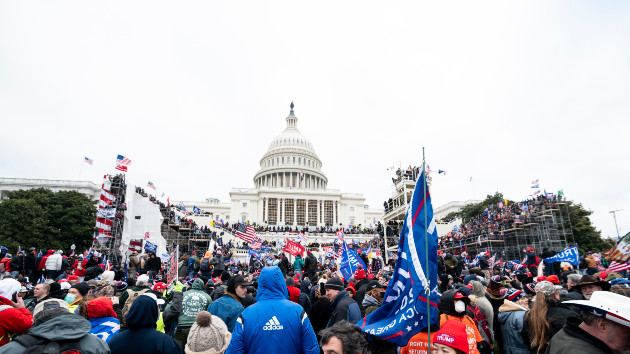 (WASHINGTON) — A former police officer who stormed the Capitol during the Jan. 6 insurrection was found guilty Monday by a jury on all six counts.

Thomas Robertson was found guilty on charges ranging from obstruction of an official proceeding to entering or remaining in a restricted building or grounds with a dangerous weapon. This is the second jury case for a Capitol rioter.

Monday marked day five of a trial that spanned hours of Jan. 6 video footage, first-hand accounts from Capitol and Metro police officers and an inside look at how FBI agents handled the arrest of both Robertson and former colleague and close friend Jacob Fracker, who testified against Robertson as part of his own plea agreement for storming the Capitol.

The jury deliberated for about 15 hours in a trial that focused on very specific details of Robertson’s actions — from where he stood to what he was holding.

Robertson entered the restricted area of the Capitol with the goal of obstructing the electoral vote, the jury found. He used a wooden stick to push past an officer, which was ruled it could be used as a dangerous weapon.

“Many people in this country disagreed with the outcome of the presidential election,” a U.S. attorney said during opening arguments last Tuesday. “Many people use, and continue to use, strong language to express their political views. But the defendant, he is not on trial for beliefs — he is on trial for his actions.”

Shortly after he found out about the warrant for his arrest, Robertson destroyed his phone along with Fracker’s, saying in a message, “anything that may have been problematic has been destroyed, including my phone,” prosecutors said during the trial.

That also means he could have corrupted two official proceedings, the jury found — either the Electoral College voting process or his own federal trial, or both.

Robertson’s lawyers said he was invited into the Capitol by an officer, stayed for only 10 minutes and didn’t assault anyone or cause any damage. The defense brought in two witnesses who each took the stand for less than 8 minutes.

“He entered, he retrieved, he departed,” one of Robertson’s lawyers said on day one of the trial. “That’s what this case is about.”

The U.S. attorney’s office brought in nine witnesses, who oftentimes took the stand for over an hour.

One of those witnesses was Fracker, who stormed the Capitol with Robertson. He agreed to testify as part of his plea agreement. He said during the trial he did this in part to lower his sentence.