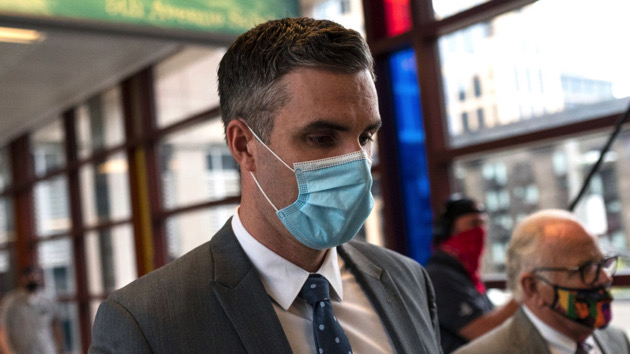 (MINNEAPOLIS) — Thomas Lane, one of the former Minneapolis police officers involved in George Floyd’s killing, has pleaded guilty to second-degree manslaughter, according to the Minnesota attorney general.

State Attorney General Keith Ellison said the plea agreement reached with Lane represents an “important step toward healing the wounds of the Floyd family, our community, and the nation.”

Lane, 38, had been scheduled to go to trial next month in state court along with his former Minneapolis police colleagues J. Alexander Kueng and Tou Thao.

All three defendants were convicted in February by a federal jury on charges of violating George Floyd’s civil rights by failing to intervene or provide medical aid as their senior officer, Derek Chauvin, kneeled on the back of the handcuffed 46-year-old Black man’s neck for more than nine minutes in the May 25, 2020, incident.

Chauvin also pleaded guilty to federal charges of violating Floyd’s civil rights and is awaiting sentencing after a judge accepted his plea earlier this month.

“Today, my thoughts are once again with the victims, George Floyd and his family,” Ellison said in a statement Wednesday announcing Lane’s plea. “Nothing will bring Floyd back. He should still be with us today.”

Ellison said he was “pleased” that Lane has accepted responsibility for his role in Floyd’s death.

“While accountability is not justice, this is a significant moment in this case and a necessary resolution on our continued journey to justice,” Ellison said.

There was no word on whether similar plea agreements are under consideration by Kueng and Thao, who are still scheduled to go on trial in state court on June 13.