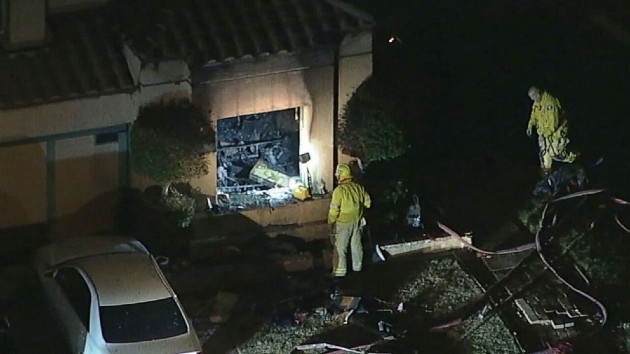 (LOS ANGELES) — A former Virginia police officer allegedly “catfished” a teenage girl online before traveling to Riverside, California, and killing her family, according to police.

The murders were discovered on Friday after authorities received a report of a girl “who appeared distressed” while getting into a car with a man, Riverside police said.

As officers responded to that report, they received calls of a fire at a nearby house.

The fire appears to have been intentionally set, police said, adding that the causes of death were still pending.

Authorities said they determined that the teenage girl seen getting into the car lived at that house and the victims killed were her mother and grandparents.

The man getting in the car with the teen was identified as 28-year-old Austin Lee Edwards of Virginia, according to police.

Several hours after the three bodies were found, authorities said they spotted Edwards driving with the teen.

Edwards — who had worked for the Virginia State Police — allegedly led deputies on a chase and fired shots at them, the San Bernardino County Sheriff’s Office said. Edwards lost control of his car and drove off the road, pointing a gun at a sheriff’s helicopter, according to the sheriff’s office.

Deputies then fired at Edwards who was declared dead at the scene, the sheriff’s office said.

The teen was rescued and wasn’t hurt, according to police.

Riverside police said they determined Edwards met the teen online through “‘catfishing,’ where someone pretends to be a different person than they actually are.”

After Edwards developed a relationship with the girl online, police said they believe he drove to Riverside, parked in a neighbor’s driveway, went to the girl’s home and killed her family. Edwards then allegedly took the teen and drove away, according to police.

“As a probationary employee, Edwards was also given monthly performance evaluations, in accordance with department policy. During Edwards’ short tenure with the department, he never exhibited any behaviors to trigger any internal administrative or criminal investigations,” the state police said in a statement.

Edwards was hired by the Washington County, Virginia, Sheriff’s Office on Nov. 16, 2022, and had started orientation with the department, according to the sheriff’s office.

“Past employers and the Virginia State Police were contacted during the hiring processing; however, no employers disclosed any troubles, reprimands, or internal investigations pertaining to Edwards,” the sheriff’s office said in a statement.

Washington County Sheriff Blake Andis added in a statement: “It is shocking and sad to the entire law enforcement community that such an evil and wicked person could infiltrate law enforcement while concealing his true identity as a computer predator and murderer. Our thoughts and prayers are with the Winek family, their friends, officers, and all of those affected by this heinous crime.”