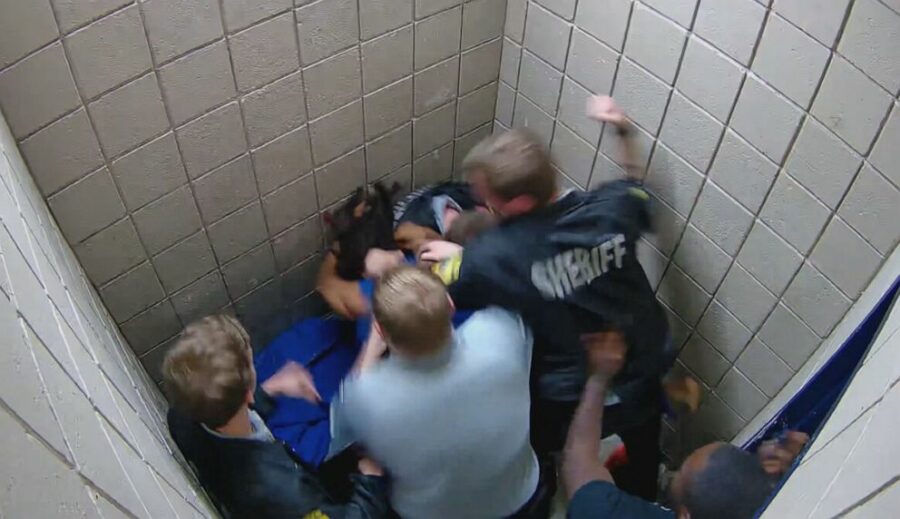 The footage from the sheriff’s office of the Sept. 3 incident was released by Daniels. It shows Jarrett Hobbs standing in a holding cell when an officer enters, seemingly grabbing Hobbs by the neck. Four more officers come in, one of whom begins to punch Hobbs in the back of the neck before other officers join in the attack.

Hobbs, a resident of North Carolina, had been detained earlier that day for allegedly speeding, driving with a suspended driver’s license and possession of a controlled substance. The Georgia Bureau of Investigation announced Wednesday it would begin an independent investigation of the “use of force incident” at the request of Brunswick Judicial Circuit District Attorney Keith Higgins.

Daniels and co-counsel Bakari Sellers announced in August a $25 million lawsuit against Camden County deputies and Sheriff Jim Proctor over the shooting death of 37-year-old Latoya James while executing a drug-related search warrant in her home in May 2021. The district attorney’s office decided not to charge the deputies involved in that shooting, according to ABC affiliate station WJXX in Jacksonville.

“While any loss of life is always tragic, the officers’ use of force in this instance was justified to protect their lives,” Higgins said in a statement in April on the James case.

“This is not a bad apple, this is a bad apple orchard,” Daniels said at a press conference Wednesday.

“We like to say the NAACP of Camden County believes in the rule of law. We want to support the law enforcement officers and treat everyone with dignity that humans deserve,” he said. “The beating of Jarrett Hobbs and other incidents that have come to light show how far the sheriff’s office still have to go.”

Daniels, Sellers, community members, and Hobbs’ family are now calling for the immediate arrest and termination of the officers involved.

“There was absolutely no reasoning, no justification, no cause, no debatable issue, no legal justification to go in that cell with a man sitting there and pummel him,” Sellers said at the conference. “[What] they did to him was a criminal act.”

According to a statement from Daniels, Hobbs had been “suffering a psychological episode” and had asked to be placed in protective confinement on the day of the incident.

According to Daniels, Hobbs suffered injuries including a chipped tooth and swelling and one of his dreadlocks was also pulled out of his head during the altercation. He says that though Hobbs complained immediately afterwards, he did not receive medical attention and was put in solitary confinement for about two weeks.

It is unclear whether any particular event prompted the incident, but Hobbs was later charged with assault and battery against a police officer.

Hobbs bonded out on all charges and was released from Camden County custody on Sept. 30, court records show. He is now in custody in North Carolina for violating his probation due to his Georgia arrest.

“Internal investigations involve reviewing of videos, questioning of witnesses, and documentation of evidence recovered which takes time, and not completed overnight,” the statement said. “The Camden County Sheriff’s Office has always been an agency that is transparent allowing the public access to all operations of each division.”

The office says it will not release the names of the deputies involved until the investigation concludes.