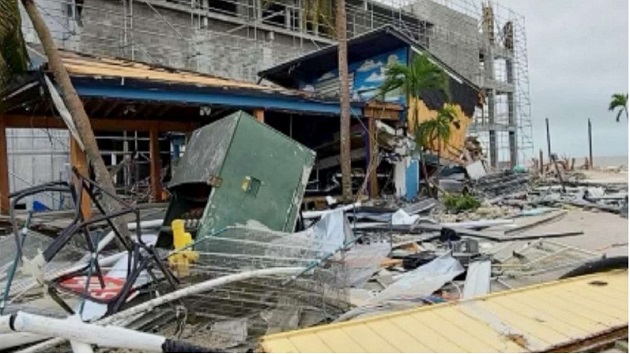 Images out of some of the hardest hit regions like Sanibel Island and Fort Myers Beach show entire neighborhoods reduced to rubble after menacing storm surge and Category 4 hurricane force winds ripped through southwest Florida on Oct. 28.

Despite threats exacerbated by climate change, such as rising sea levels and the threat of more intense storm systems, and the challenges presented by the sheer level of devastation, residents are vowing to bring these coastal communities back to their former glory.

“There’s no doubt that the rebuilding efforts, the reconstruction efforts, after Hurricane Ian, are going to be very challenging, and they’re going to take longer than they ordinarily would,” Matthew Harrell, CEO of Franklin Street, a commercial real estate company that specializes in Southwest Florida, told ABC News.

As local and national news stations broadcast the effects of Hurricane Ian live, one of the most striking images were videos of storm surge rushing into The Salty Crab Bar & Grill, a community favorite situated right on the Gulf of Mexico in Fort Myers Beach.

The restaurant was completely destroyed by the storm, Jamie McElhone, marketing coordinator of The Salty Crab, told ABC News.

The damage to the restaurant has not been surveyed yet, as search and rescue teams remain focused on locating those who died in the storm and may still be among the rubble, McElhone said.

Civilians have not yet been allowed to enter the region, she added. Seventy-eight employees for the restaurant have been left scrambling to find work. Some have relocated about 200 miles north to Clearwater, where the Beachside Hospitality Group, which owns The Salty Crab, operates another restaurant.

The plan is to rebuild the restaurant, as long as the insurance and building codes allow them to, McElhone said.

The expense of rebuilding will certainly be an issue that city officials will be grappling with in the coming weeks and months, Harrell said. After a major catastrophe, there is often a “demand surge,” which involves a temporary increase in the cost of reconstruction due to high demand of materials and labor.

The rebuilding efforts are expected to take longer than usual because of breakdowns in the supply chain and labor shortages that existed prior to Ian, Harrell said.

Max Doyle and the pub he co-owns with his father, the Celtic Public House in Punta Gorda, is a prime example of successful efforts to rebuild following a hurricane.

The pub was destroyed by the winds of Hurricane Charley in in 2004.

“It looked like Mother Nature decided to redecorate our town,” Doyle said of the damage.

Even though the Doyles did not have the money or an insurance payout to fund the rebuilding, “it was just something that had to be done,” he said. They relied on community donations and eventually restored the pub, he said.

The risk of hurricanes is something “you sign up for” when you move to Florida, Doyle said. The pub has since withstood every storm, including Ian, he added.

“There’s not really anywhere in the country where you don’t have some sort of natural disaster,” he said.

It will likely take years to rebuild the regions to what they once were, President Joe Biden on Wednesday after visiting Fort Myers Beach.

Harrell praised the resiliency of Floridians during a crisis and expects communities to build back “stronger than ever” — with an ability to withstand the next “big one” that heads their way, Harrell said.

Many of the structures that were destroyed were built decades ago, before the building codes in Florida began to take into account the threat of strong hurricanes, Harrell said. All of the newly constructed properties will be built to current codes — including impact-resistant windows and roof straps that enable roofs to withstand 155-mile winds.

The properties that remained unscathed are the ones that were built to code, Harrell said, adding that there are discussions to strengthen those codes even further in the wake of Ian. The landscape of these regions won’t look the same either, with homes being rebuilt on stilts or raising the elevation of structures with dirt to withstand the base flood elevation.

“So the likelihood of having a similar type of even like Hurricane Ian … is much less likely to happen in the future,” Harrell said.

In addition, even those insurance rates will rise, the rates for newly built properties that are up to code will be less expensive, Harrell said.

Despite the risk of hurricanes, the areas still present desirable attributes such as beautiful beaches, warm weather and economic opportunities that come with tourism, Harrell said.

“There are very few parts of the country that are safe from any sort of natural catastrophes,” he said. “We have a history of just coming out of these catastrophes stronger better than better than ever.”