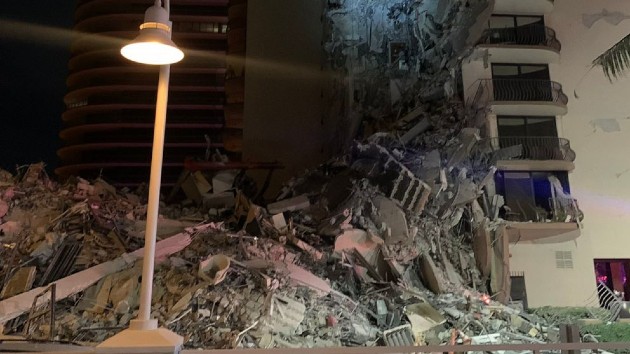 At least three people are dead as many as 99 are unaccounted after a 12-story residential building partially collapsed in Miami-Dade County, Florida, early Thursday, a county official told ABC News.

The collapse of the Champlain Towers South condominium in the small, beachside town of Surfside, about 6 miles north of Miami Beach, was reported around 1:30 a.m. A massive search and rescue operation was launched before dawn and crews are still carefully combing through the wreckage and remaining structure in hopes of finding survivors.

It’s unclear exactly how many residents are missing.

The Foreign Ministry of Paraguay said six Paraguayan nationals were in the building and still missing: Sophia López-Moreira, the sister of the country’s first lady; her husband, Luis Pettengill; their three children; and their nanny, Lady Luna Villalba. President Mario Abdo Benítez canceled his events due to the incident.

Gabe Nir, who lives in Champlain Tower South with his mother and sister, told ABC News that they ran from the building when they heard the collapse.

Nir said he felt a second, more intense collapse, and said they ran for their lives as a thick cloud of white dust enveloped them, making it hard to breathe. Nir, who compared the collapse to an earthquake, said he’s grateful to be alive.

One witness told ABC News that his wife cares for an elderly woman who lives in the condominium and frantically called him around 1:15 a.m. local time, after the units next door came crashing down. He said his wife and the elderly woman both were rescued.

So far, crews have rescued 35 people who were trapped in the building and two others from beneath the rubble, according to Miami-Dade Fire Rescue Assistant Chief Raide Jadallah.

A Miami-Dade county official said it’s been difficult determining how many people were in that section of the complex partly because there isn’t an on-scene management company that keeps track. The condominium is a mix of full-time residents, seasonal residents, renters and short-term visitors, so authorities have been relying largely on neighbors and word of mouth.

The oceanfront condominium has 136 units, and approximately 55 of them collapsed along the northeast corridor, according to Jadallah.

Footage from the scene showed firefighters pulling a boy from the rubble alive and rescuing others from still-standing balconies.

Jadallah told reporters that at least 45 people, including those who were rescued, were medically assessed and treated on site. Aventura Hospital and Medical Center said it’s received three patients — two with critical injuries, one in fair condition — and Jackson Health System said it has two patients.

“It’s a tragic day,” DeSantis said at a Thursday afternoon news conference. “We still have hope to be able to identify additional survivors.”

Burkett, the Surfside mayor, told reporters that the condominium was built in the 1980s and was believed to be substantially full at the time of the partial collapse. The building was undergoing roof work, he said.

Surfside Commissioner Nelly Velasquez told ABC News the building was up for its 40-year recertification.

Miami-Dade has an urban search and rescue team that has been dispatched to earthquakes and other disasters all around the world, but this is the first time the team has been deployed on home turf, a county official said.

“We need to allow them to do their work because every minute in this search can make a huge difference,” she said at a news conference.

There’s real concern about the structural integrity of the remaining building, particularly from dangling wires and portions of concrete, a county official said. Fires have flared up throughout the day, adding to the danger for the search and rescue teams, the official said.

The unaffected section of the complex was cleared as of 8 a.m., the official said. Because of the lingering dangers, several blocks will be closed for the next week.

The cause of the collapse is unknown, and the Miami-Dade Police Department is leading an investigation.

“Our goal is to provide a thorough investigation and closure for our families,” Freddy Ramirez, director of the Miami-Dade Police Department, told reporters Thursday morning.

President Joe Biden said he spoke with the mayor of Miami-Dade, as well as Rep. Debbie Wasserman Schultz, who represents the district. Biden said he was waiting on the governor to ask for an emergency declaration, but he is “ready to move from the federal resources immediately, immediately, if in fact we’re asked for it.”

A family reunification center has been set up for anyone looking for unaccounted or missing relatives at 9302 Collins Avenue. If you have family members that are unaccounted for or are safe, please call 305-614-1819 to account for them. pic.twitter.com/ksQ9LubG8V