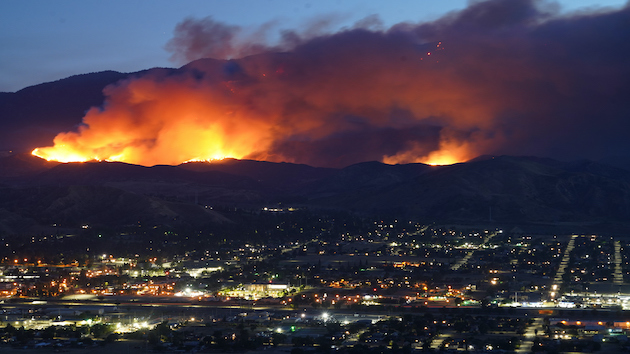 (Los Angeles) — Fires are continuing to spark in the West as a heat wave blankets millions of residents.

Heat alerts are currently active across seven states in the West as the heat wave continues into Sunday. Temperatures in the triple digits are expected in California, Arizona, Oregon and Idaho. Temperatures are set to break records in cities like Flagstaff, Arizona; Salt Lake City, Utah; Bakersfield and Fresno, California; and Billings, Montana.

Extreme drought and dry conditions are persisting in the West as another heat waves looms, creating matchbox conditions for any spark to ignite into a fast-moving blaze.

In California and Nevada, temperatures in the 90s and 100s — along with single digit humidity values — will be conducive to rapid spread again on Sunday.

The Beckwourth Complex Fire in Doyle, California, is now the state’s largest wildfire at 83,926 acres and is only 8% contained, according to the U.S. Forest Service. The fire prompted mandatory evacuations, closed portions of U.S. Route 395 and crossed state lines into Nevada, ABC Sacramento affiliate KXTV-TV reported.

The Bootleg Fire in Klamath County, Oregon, grew to more than 143,000 acres on Sunday, prompting evacuations in the area, according to the U.S. Forest Service. It was first spotted in the Fremont-Winema National Forest on July 6 but exploded to 75,000 acres on Saturday, ABC Portland affiliate KATU reported.

Evacuations were also ordered due to the Rock Creek Fire in Craig, Montana, which shut down portions of Interstate 15.

The possibility of isolated thunderstorms in Montana on Sunday afternoon could bring breezy conditions and also cause lightning ignitions.