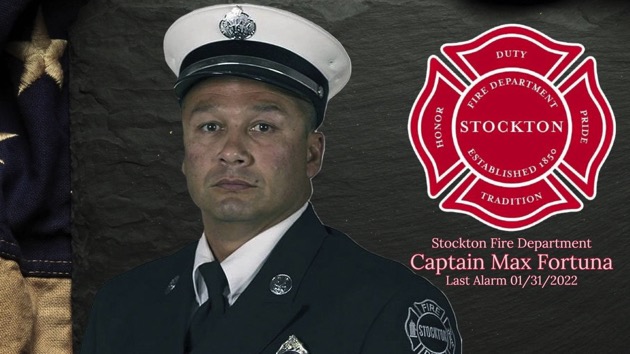 (STOCKTON, Calif.) — Firefighters in Stockton, California, are mourning one of their own, 47-year-old Fire Captain Vidal “Max” Fortuna, who was gunned down while putting out a fire on Monday.

The suspect, Robert Somerville, 67, was arrested Monday and booked into the San Joaquin County Jail on homicide and weapons charges, the Stockton Police Department said.

Fortuna was shot while at the scene of a dumpster fire, which was reported to 911 around 4:45 a.m. Monday, officials said.

Officers arrived at the scene and detained Somerville, officials said, adding that police found a .380 caliber handgun at the scene.

Somerville is due in court Wednesday.

As Stockton’s firefighters grieve, fire departments from neighboring communities are staffing Stockton’s fire stations and responding to calls, according to the city.

“We are extremely grateful that our partners have come together to provide mutual aid to our community while we, as individuals and a department, are grieving and healing from this horrific and tragic event,” Chief Edwards said. “While the engine or truck may have a different name on the side, we want to let the community know that you are in good hands with professional firefighters who will be protecting and serving our community.”