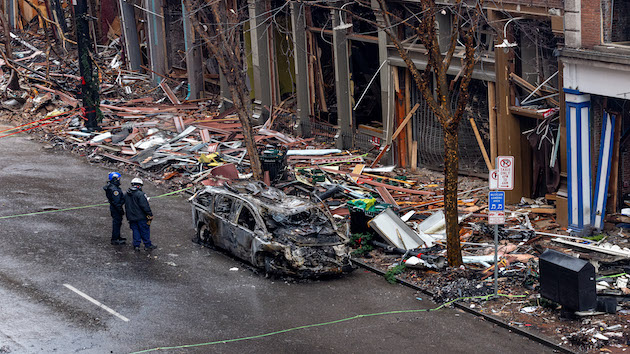 (NASHVILLE, TENN.) — The bomber authorities say set off an IED in his RV on Christmas Day in Nashville, Tennessee, was driven by conspiracy theories and intended to kill himself, but was not motivated by terrorism, an FBI report released Monday found.

About 6:30 a.m. on Christmas Day, Anthony Quinn Warner set off a bomb inside his RV in downtown Nashville killing himself, and blowing out windows of nearby buildings, authorities said.

Before the explosion, an eerie recording counted down to detonation and the Petula Clark song “Downtown” played from the RV.

“Warner specifically chose the location and timing of the bombing so that it would be impactful, while still minimizing the likelihood of causing undue injury,” the FBI assessed.

“His actions were determined to not be related to terrorism,” the report said.

“[T]he FBI assesses Warner’s detonation of the improvised explosive device was an intentional act in an effort to end his own life, driven in part by a totality of life stressors – including paranoia, longheld individualized beliefs adopted from several eccentric conspiracy theories, and the loss of stabilizing anchors and deteriorating interpersonal relationships,” according to the report.

Eight people were injured in the blast. Warner was the only person killed.

Javed Ali, a former senior director for counterterrorism at the National Security Council, told ABC News that the FBI is justified in finding the bombing wasn’t terrorism because it lacked a political motive.

“The FBI’s statement regarding the investigation in last December’s suicide bombing by Anthony Warner in Nashville shows after what appears to be a careful and thorough review, no ideologically-motivated justification was found to fit either a legal definition or analytic construct for terrorism,” Ali, also a former senior FBI official said in a statement. “Ultimately, the Nashville attack seems to be an outlier to the broader threat of domestic violent extremism in the United States, as recently demonstrated by the insurrection at the US Capitol on 6 January.”

ABC News has previously reported that Warner was interested in various conspiracy theories, sources familiar with the investigation said.

The theories include ones involving “lizard people” — a belief that shape-shifting reptilian creatures appear in human form and are bent on world domination.

The FBI stresses that only Warner knows the real reason for his actions on Christmas Day.

The FBI says they recovered more than 3,000 pounds of evidence from the blast site, received 2,500 tips and interviewed 250 people.

Nashville police officers were praised for their quick action in clearing buildings — even being honored by the city’s NFL team.

Officers Brenna Hosey, Tyler Luellen, Michael Sipos, Amanda Topping, James Wells and Sergeant Timothy Miller were in attendance an NFL playoff game against the Baltimore Ravens and plunged the Titans Sword of Honor to mark the countdown to kickoff and were recognized as the game’s honorary 12th Titans, according to the Tennessee Titans.