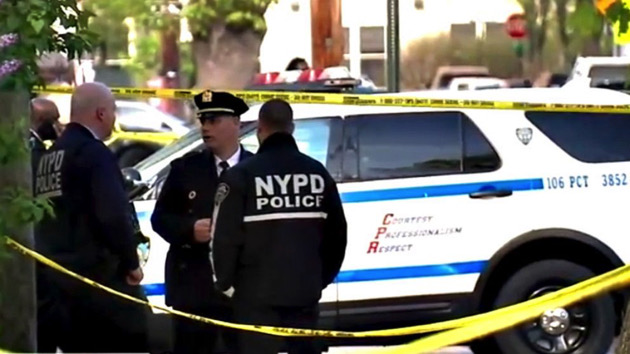 (NEW YORK) — The mother of a New York City police officer was killed Wednesday afternoon when she answered a knock at her door and was shot in the head allegedly by a 41-year-old man, who drove to a police station and turned himself in, authorities said.

The broad daylight shooting of 51-year-old Anna Torres rocked her neighborhood in the city’s Queens borough and sent children walking past the home running for cover as the gunfire erupted, according to security video obtained by ABC station WABC in New York.

A motive for the brazen act of gun violence is under investigation, but NYPD officials said it apparently is not connected to the work of Torres’ son as a police officer.

The suspected gunman was identified as 41-year-old Giuseppe Canzani, according to police.

The ambush shooting unfolded around 2:30 p.m. in the Ozone Park neighborhood of Queens when Torres answered a knock at her front door and was shot, authorities said. The gunman fired two or three shots and fled, police said.

Two of Torres’ relatives were inside her home at the time of the shooting, police said.

Shortly after the shooting, a man matching Canzani’s description was captured on security video walking away from Torres’ home holding what appeared to be a silver handgun, getting into a parked black Chevy Traverse SUV and driving away, according to police.

“The male exited the vehicle, pulled out a firearm and placed it on the sidewalk,” O’Sullivan said at a news conference Wednesday night. “There were two officers in front of the precinct for station-house security. The officers successfully handcuffed the individual and removed the firearm away from the subject.”

The suspect was charged with second degree murder and criminal possession of a firearm. He is scheduled to appear in court on Thursday.

Neighbors told WABC that a man matching Canzani’s description was seen in recent days arguing with Torres in the backyard of her home, but could not say what the disagreement was about.

The shooting left residents in the neighborhood stunned.

“This is unbelievable,” neighbor Alam Shofi told WABC. “It’s so quiet and so nice. Everyone knows each other. I’ve been here almost 6 years. Never, nothing happened.”

Neighbor Patricia Tominelli added, “It’s scary that our family lives here. Our grandparents live next door. You don’t know was it a home invasion or not; you don’t know what it is.”