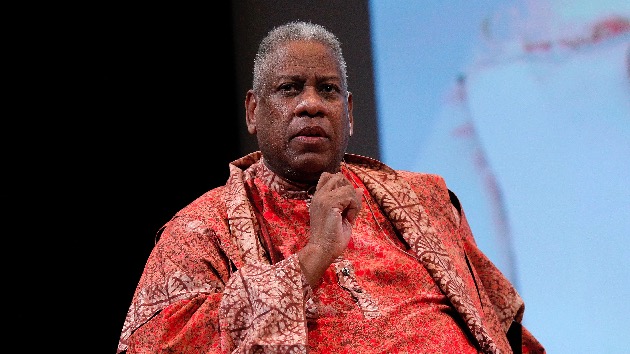 “It is with great sadness we announce the passing of André Leon Talley on January 18, 2022 in New York,” the statement read. “Mr. Talley was the larger-than-life, longtime creative director at Vogue during its rise to dominance as the world’s fashion bible.”

The cause of his death was not disclosed.

“Over the past five decades as an international icon was a close confidant of Yves Saint Laurent, Karl Lagerfeld, Paloma Picasso and he had a penchant for discovering, nurturing and celebrating young designers. His byline appeared in Vanity Fair, HG, Interview, Ebony and Women’s Wear Daily and he was the editor of Numero Russia,” the statement continued. “Mr. Talley wrote several books, including Valentino, A.L.T.: A Memoir, A.L.T. 365+ and Little Black Dress for Assouline, and contributed to Valentino: At the Emperor’s Table and Cartier Panthère. He was the subject of the documentary The Gospel According to André and his recent memoir, The Chiffon Trenches became a New York Times Best Seller.”

Talley was an American fashion journalist known for his work in shaping U.S. Vogue and fashion as a whole. He was the magazine’s fashion news director from 1983 to 1987 and its creative director from 1988 to 1995. He was later made editor-at-large, a position he held until 2013.

Talley, who later became the head of Numéro Russia magazine, remained an occasional contributor to Vogue following his departure as editor, and in 2019, wrote a piece honoring his late friend, designer Karl Lagerfeld, who died in February of that year.

“In 2014, he was named artistic director of Zappos Couture, and he has been on the Board of Trustees of Savannah College of Art and Design since 2000,” the statement on his Instagram reads. “Mr. Talley was awarded the Chevalier de l’Ordre des Arts et des Lettres from the French Republic in 2020 and the North Carolina Governor’s award for literature in 2021. He was a long-standing member of Harlem’s Abyssinian Baptist Church.”

Apart from his contributions to Vogue, the six-foot-six star, known and loved for his sense of humor, honesty and loud, luxurious personal style — especially when it came to designer caftans, was an author, curator and TV personality. He starred in “America’s Next Top Model” for four seasons, as a judge, made cameos on “Empire” and the first “Sex and the City” movie, dressed and profiled then-first lady Michelle Obama for Vogue, had a front row seat at the most prestigious couture shows around the world, became the muse and confidant of many designers — including Oscar de la Renta, whom he curated a museum exhibition for in 2018 — and, for many years, was the right-hand man of fashion’s leading lady: Anna Wintour.

In 2017, filmmaker Kate Novack released a documentary, “The Gospel According to Andre,” about the style legend — starting from his humble upbringing to his rise to the top of the fashion industry.

Throughout his career, the Durham, North Carolina, native made efforts to introduce more culturally diverse voices into the overwhelmingly white fashion industry and spoke out about his struggles with racism. In his 2020 book, “The Chiffon Trenches: A Memoir,” he recalled the emotion he felt when Edward Enninful was named the first Black editor-in-chief of British Vogue. That same year, Talley sent shockwaves across the fashion world when he spoke out about the lack of Black talent at Vogue. “At one point, I was the only Black person on Anna’s staff,” he told MailOnline.

In his 2003 memoir, “A.L.T.,” Talley described his childhood in Durham, where he was raised by his grandmother and worked as a taxi driver to save money. When it was time for college, he enrolled in North Carolina Central University, where he majored in French, and later, got a scholarship to Brown University, for his master’s. Soon after graduating, Talley got his first job in fashion as a volunteer assistant to Diana Vreeland at the Metropolitan Museum of Art’s Costume Institute. Once inside the fashion bubble, he landed a position at Andy Warhol’s Interview magazine, where his career as a journalist took off, and later moved around to WWD, Vanity Fair, Vogue and various other publications.

Talley had largely stayed off social media since 2021, when he was involved in a financial mess over the ownership of the Westchester mansion where he lived since 2004, and which previously belonged to the former CEO of Manolo Blahnik.

After hearing of his death, fashion insiders and friends have taken to social media to share their condolences and honor his memory.

Designer Diane von Furstenberg wrote on Instagram, “Good bye darling André ❤️????… no one saw the world in a more glamorous way than you did ❤️????… no one was grander and more soulful than you were ❤️????…the world will be less joyfulI ❤️???? I have loved you and laughed with you for 45 years…. I miss your loud screams …I love you soooo much ❤️????.”

Marc Jacobs posted a throwback photo of himself with Talley on Instagram, and wrote in the caption, “I am in shock. You championed me and you have been my friend since my beginning. Our chats, the moments we shared….oh my friend. You and your passions were larger than life. I love you and I will miss you dear Andre. Rest In Peace.”

Lindsay Peoples Wagner, editor in chief of The Cut, wrote on Instagram: “Not even sure how to wrap my mind around all you’ve done, and the legacy you’ve left behind, but you gave us hope and aspirations that we never would have dreamed if it hadn’t been for you andre.”

“Thank you for your knowledge and passion for fashion and glamour,” designer Bob Mackie wrote on Instagram. “You will be missed.”

Hollywood and Broadway praised Talley as a man who dressed himself and others with a singular vision. “Rest well king,” Viola Davis wrote on Instagram.

Talley was a “truly original heart, spirit and mind. He cast a giant shadow and will not soon be forgotten,” author and actor Harvey Fierstein said on Twitter.

“For a little black gay boy who reached for the stars from the south there were few people I could look up to up there amongst the stars who looked like me just more fab except for you Andre,” playwright Jeremy O. Harris said on Twitter. “For a generation of boys Andre Leon Talley was a beacon of grace and aspiration. RIP.”