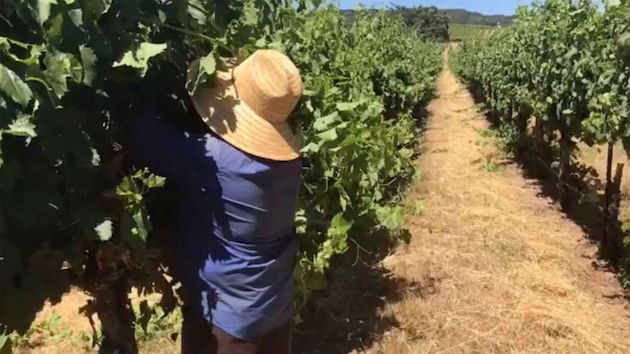 (NEW YORK) —An unrelenting heat wave has been scorching the West and the Plains this week, and while many can hide inside and crank up the air conditioning, farmworkers have to endure the dangerous conditions.

Heat kills farmworkers every year, according to Elizabeth Strater, director for strategic campaigns at United Farm Workers. The Bureau of Labor Statistics in 2019, the most recent year for which data is available, recorded 43 deaths linked to heat exposure.

Compared to other outdoor workers, farmworkers are especially vulnerable if they’re earning a piece-rate wage instead of being paid hourly, because that’s an incentive to not slow down or take breaks, she said.

Andres was harvesting was bell peppers in Bakersfield CA yesterday. This is hard work, as he spends all day bent over. This week was particularly brutal as yesterday’s high temp was 106° and it’s expected to reach 110° today. #WeFeedYou #Calor pic.twitter.com/yB8voxHZPE

Also, the many farmworkers who are undocumented immigrants are more likely to experience labor abuses and are less likely to speak up, she added.

And the risk to farmworkers only increases as do global temperature, Strater warned.

Amid the heat wave, organizers are doubling down on their efforts to make sure workers are taking extra precautions and staying hydrated, said Armando Elenes, secretary treasurer at United Farm Workers.

Martín sent us this pic yesterday from Brawley CA. He was digging a canal so they can water the fields and get them ready for planting. At 8:30 am it was 89° and the high reached 116°. #WeFeedYou #Calor pic.twitter.com/guSRkmn6oL

“You’re always concerned whenever temperatures come up like that,” Elenes said. “Right now the most common question [from workers] is, is there a cutoff temperature? Some industries have that, but not agriculture. It’s really left up to the employer. “It could be 110, but an employer’s not obligated to send their employees home.”

Some employers choose to let workers start earlier in the day before temperatures begin climbing or they allow them to leave when conditions become too grueling, Elenes said.

Ramón sent this from where he was working in the mangos in Coachella CA on Monday. The high was 115°. Today the high is 121° and tomorrow it will reach 122°. Ramon says they are being sent home 2 hours early because the heat is so brutal. #WeFeedYou #Calor pic.twitter.com/vqVnCN9ZEb

A federal bill, the Asunción Valdivia Heat Illness and Fatality Prevention Act, was introduced in the House and Senate this year to ensure safety for workers exposed to dangerous heat.

The bill aims to require the Occupational Safety and Health Administration to establish an enforceable standard of protections, like access to water, paid breaks in cool areas, limits on time in the heat and providing emergency responses for workers suffering from heat-related illnesses. The act also wants to ensure that employers give workers training on the risk factors that can lead to heat-related illnesses and how to identify and respond to symptoms.

“This federal bill’s standards are modeled after the California bill that farmworkers fought so hard for,” Strater said. “It’s sobering to remember farmworkers do not have heat protection standards in states like Florida, Arizona and Nevada where the heat can be so extreme. Even in states like Indiana and Michigan, the seasonal work is in the summer when heat and humidity is high.”

But “laws on the books are not the laws in the fields,” Elenes said.

“It’s really about enforcement,” Elenes said, and making sure employees are informed and feel represented. “When workers have representation, they feel more comfortable speaking up. When they don’t have representation, which is the majority of employees, a lot of times they choose to not say anything.”