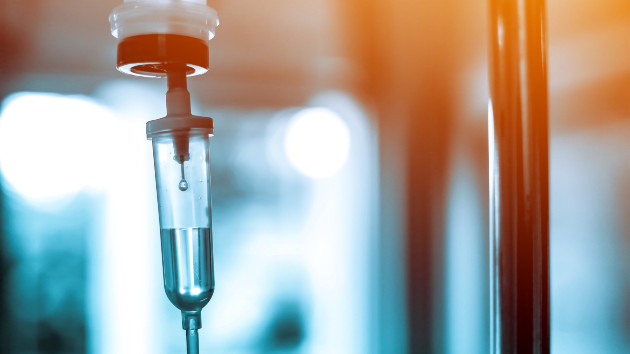 (SAN ANTONIO) — A Texas teenager remains on life support more than three weeks after he was shot by a now-former police officer who confronted the unarmed teen while he was eating a hamburger in his car, attorneys for his family said Tuesday.

Erik Cantu, 17, was shot at least four times during the encounter in a San Antonio McDonald’s parking lot on Oct. 2, his family said.

His mother, Victoria Casarez, said her son was shot in his diaphragm, lungs, liver and bicep — and that one of the bullets remains lodged near his heart.

“He’s just mutilated,” she said during a press briefing surrounded by their extended family and their attorneys. “It just hurts us to see our son that way.”

His father, Erik Cantu Sr., described his son’s condition as “very touch and go,” and that he developed pneumonia while in the hospital.

The family’s attorneys said they believe the teen will survive his injuries and referred to Cantu as a “fighter.”

“But what quality of life will he have once he gets through it?” civil rights attorney Ben Crump, an attorney for the family, said.

The San Antonio Police Department said on Oct. 5 that it fired the officer, James Brennand, while releasing body-camera footage that showed him shooting nearly a dozen times at the teen’s car as Cantu drove away. Brennand’s actions violated department tactics, training and procedures, according to San Antonio Police Chief William McManus.

The rookie officer, who had been on the force for seven months, was subsequently charged with two counts of aggravated assault by a public servant, according to the San Antonio Police Department Homicide Unit. He was booked on Oct. 11 and released from Bexar County Jail the following day after posting a $200,000 bond.

A hearing has been set for Nov. 23. ABC News has reached out to his attorney for comment. Neither Brennand nor his attorney, Jay Norton, have yet to release a statement or publicly comment on the case.

The San Antonio Police Officer’s Association said it is not representing Brennand because he had not completed his 1-year probationary period for new officers at the time of the shooting and was therefore not eligible for the benefit.

The family’s attorneys said they were grateful that charges were pressed, but that the family would like to see more. Casarez said she would like to see the former officer charged with two counts of attempted murder and “behind bars.”

“That being said, I pray for his family,” she said.

Crump called the use of force “excessive” and claimed that the former officer racially profiled the teen.

“He profiled this young Hispanic teenager. He profiled him, there’s no question about it,” Crump said. “If we don’t get justice for Erik Cantu, then it can happen to you.”

Crump said his office has reached out to the Department of Justice’s Civil Rights Division to review the case.

“What crime was being committed by two 17-year-old kids parked in a McDonald’s parking lot eating a cheeseburger?” Crump said.

According to police, Brennand was responding to a disturbance call when he noticed a vehicle he thought had fled from him the night before during an attempted stop. The car had no connection to the disturbance call, police said.

Police said the officer reported the car door hit him as the unarmed teen started to reverse the car.

Body-camera footage shows the officer firing 10 times, including into the car and after Cantu started to drive away, before chasing after it on foot.

Cantu was initially charged by proxy with evading detention in a vehicle and assault on an officer, though the Bexar County Criminal District Attorney has since dismissed the charges.