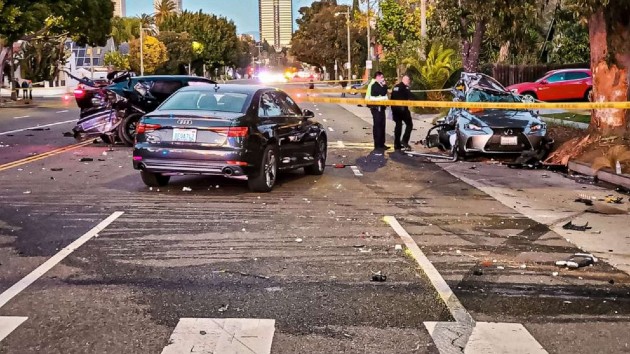 (LOS ANGELES) — In the aftermath of a fatal car crash in Los Angeles last month, a family is reeling from the sudden death of their daughter, and vehicular manslaughter charges are being considered for the 17-year-old driver of the Lamborghini involved in the collision.

Monique Muñoz, 32, of Hawthorne, California, was driving home from work shortly after 5 p.m. on Feb. 17 in West Los Angeles when a black Lamborghini SUV collided with her Lexus sedan, police said. Her car was totaled. The Los Angeles Fire Department responded and rendered aid, but she was pronounced dead at the scene, police said.

Following the crash, LAPD West Traffic said it was a “costly reminder for everyone to slow down.” The teen was driving at a “high rate of speed” when he slammed into the Lexus, LAPD Capt. Brian Wendling said, according to the Los Angeles Times.

The driver of the Lamborghini, who has not been identified because he is a juvenile, was hospitalized following the crash, police said. He was booked for vehicular manslaughter on Feb. 23, the Los Angeles Police Department said Wednesday in a statement.

In the weeks since the fatal crash, Muñoz’s friends and family have called for charges to be filed against the teen driver. Last week, they held a protest at the scene of the accident, and another is scheduled for Saturday afternoon.

“Who gives a kid a Lamborghini?” Isaac Cardona, Muñoz’s stepfather, told Los Angeles ABC station KABC-TV this week. “I don’t care how much money you have, you don’t give a kid a sports car — especially a kid that doesn’t even know how to drive right.”

The case was recently presented to the Los Angeles County District Attorney’s Office and is currently under review.

Muñoz’s family said they haven’t heard much from the prosecutor’s office.

“I contacted them one time and after that they mentioned that the case was still pending and had not even reached their desk yet,” Carol Cardona, Muñoz’s mother, told KABC. “And this has been over a week already and I have not heard from anybody.”

In a statement to ABC News, the Los Angeles County District Attorney’s Office said it could not provide information on the case at this time because juvenile court proceedings, records and case files are kept confidential under state law.

“Monique’s death is a giant loss for her family, our community and for all of us as Angelenos,” the statement said.

The father of the 17-year-old driver has publicly addressed the fatal crash. In a social media post this week, James Khuri apologized to Muñoz’s family “for the tragic loss of their daughter.”

“There are no words I can say to alleviate the pain that you are experiencing,” Khuri, an LA entrepreneur, said. “And I realize none of my words or actions will be able to bring back your daughter. Still, I want to offer my support in any way you will allow me to. My family and I pray for the Munoz family.”

Muñoz’s private funeral services were held on Thursday, the family confirmed to ABC News. The recent college graduate worked at UCLA and was planning to pursue a career in criminal justice.

“She was smart, she was beautiful and she had a heart of gold,” her mother told KABC.