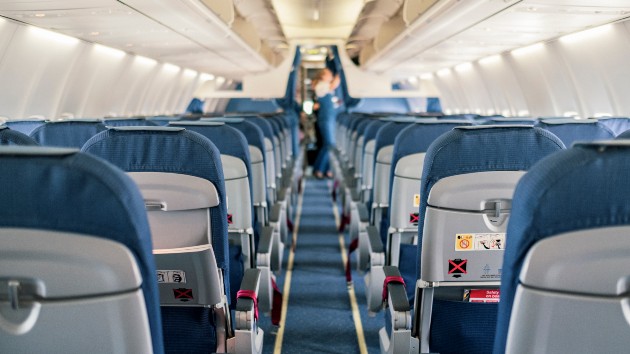 (NEW YORK) — From the friendly skies to the unruly ones — the Federal Aviation Administration (FAA) is continuing its crackdown on disruptive passengers as the agency continues to see more incidents than years prior.

On Monday, the FAA proposed its largest fine to a passenger this year, a whopping $52,500, for a man who punched a flight attendant in the face and tried to open the cockpit door. The agency has proposed almost $350,000 in total fines to unruly passengers since January.

“We have seen an alarming increase in the rate over the last few months, and it’s something that we need to get under control,” FAA Administrator Steve Dickson told ABC News’ Transportation Correspondent Gio Benitez. “This is something that we should all be concerned about.”

Airlines have referred more than 1,300 cases of unruly passengers reports to the FAA. The agency has identified violations in 350 of those cases.

“In a typical year the agency will end up taking this type of enforcement action in about 100 to 160 enforcement cases so it’s nothing new,” Dickson explained. “What really is new is the volume that we’re seeing right now.”

The cases range from passengers bringing their own alcohol on board, berating the flight attendants, not wearing a face covering and, in some cases, physically assaulting the cabin crew.

In response to the increase in flight disturbances surrounding the Capitol insurrection, Dickson signed an order in January directing the agency to take a “zero-tolerance policy” in unruly passenger cases — handing down stricter punishments without a warning, including fines of up to $35,000 and imprisonment.

“Have you seen a decrease in incidents since you announced that these fines would be in place?” Benitez asked the administrator.

“We saw a big increase earlier in the year, and we continue to track the rate,” Dickson replied. “But it’s still not where it needs to be.”

Passengers have 30 days to respond after receiving the FAA’s enforcement letter. From there they have the option of paying the fine, contesting the facts or even telling the agency that they cannot afford it.

When asked if any unruly passenger has paid the FAA’s proposed fine Dickson said they are still in the “very early stages.”

“The first few cases are still, still in process,” Dickson said. “So we’re not quite to that point yet.”

The FAA’s zero-tolerance policy is in place until September, but it could be extended.

“We’ll go wherever the data tells us to go,” he said.