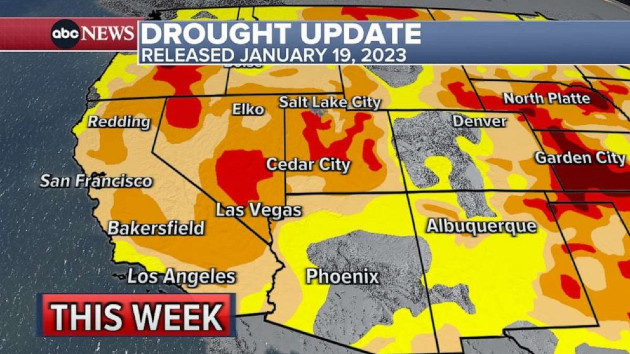 (NEW YORK) — “Extreme” drought has been completely eliminated in California for the first time in nearly three years, according to the U.S. Drought Monitor.

While the drastic change for California has happened over the last few weeks, the most recent batch of rain has completely eliminated the “extreme” drought category. However, while smaller reservoirs have returned to averages, many larger ones still remain low, according to experts. And it’s still “too early to tell if the wet weather is enough to end the drought.”

This is the first time since April 2020 that there has been no “extreme” drought in California.

While drought in the western U.S. continues to improve overall, the Colorado River Basin lags behind the Sierra Nevadas in terms of recovery.

It will take several seasons such as this one to help eliminate the drought in the area, which includes reservoirs Lake Mead and Lake Powell.

The National Weather Service Weather Prediction Center recently released top totals from the parade of storms that moved into California from Dec. 26 through Jan. 17. The top snow total was 240 inches in Mammoth Mountain and near Honeydew, California, nearly 4 feet of rain fell (47.7 inches).

The California snowpack continues to remain above normal for the entire season. When looking at season to date, parts of the Sierra Nevada Mountains are nearly three times their average for this time of year.

The Colorado River Basin — parts of Southern California, Utah, Arizona, Colorado, New Mexico, Nevada and Wyoming — has not had the large rain totals seen in Northern California, but the region is having an excellent season for snow and rain.

Some parts of the basin are now seeing their wettest season on record and this will greatly alleviate the drought in some areas.

Colorado’s current snowpack is at 128%. Some parts of Utah have reported over 200% of their snow-water equivalent compared to average. When the snow melts, it will eventually flow into the Colorado River and help alleviate reservoir stress.

However, critical reservoirs in the southwest U.S., like Lake Mead and Lake Powell, need this rainy and snowy pattern to happen for multiple seasons in a row. Daniel Swain, a climate expert at University of California, Los Angeles, told ABC News last year that it could take until the end of this century to eradicate this deep of a drought.

Additionally, it may take time before the relief hits the reservoirs since some of it comes from snowmelt. Lake Mead is currently at 28% capacity, which is well below where the lake has been at this time in the last few years.