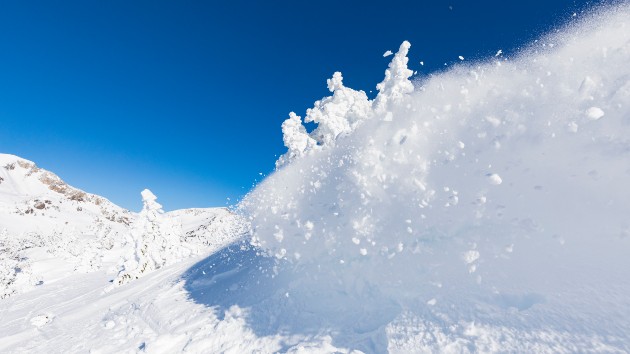 (NEW YORK) — A weak base layer of snow, combined with an increased interest in backcountry skiing during the COVID-19 pandemic, has likely contributed to one of the deadliest weeks for avalanches in U.S. history, experts said.

From Jan. 31 to Feb. 6, 14 people died after getting caught in avalanches — marking it the deadliest week in the U.S. since 1910 for the accidents, according to the National Avalanche Center.

As of Feb. 10, 22 people have died from avalanches this winter, with over half occurring in Utah and Colorado, according to the Colorado Avalanche Information Center. In the deadliest among them, in Utah’s Salt Lake Valley on Feb. 6, four people died after triggering an avalanche, while another four managed to escape, authorities said.

During last year’s winter season, 23 people died in avalanches, according to the center.

Some common threads have emerged from this season’s tragic incidents. They were often experienced backcountry explorers who triggered avalanches as they navigated regions outside of resort boundaries. In some cases, they were equipped with potentially life-saving gear like avalanche airbags (to buy some precious time if fully buried in the snow), transceivers or beacons to help locate buried victims and probes and shovels to then dig them out. But despite rescue or resuscitation efforts, many victims died.

The accidents also occurred during a season that experts have warned is especially prone to dangerous avalanches. A dry start to the winter, with not much snowfall, created a very weak base layer of the snowpack across the western U.S. As snow builds on top of that weak layer, avalanches are easier to trigger, and may also be wider, Ethan Greene, director of the Colorado Avalanche Information Center, told ABC News.

“These conditions are not unique. They’re not unprecedented, but they’re also not common,” said Greene, who characterized the avalanche conditions in Colorado as a “1-in-10” event. “So if you’ve been recreated in Colorado in the wintertime for 20 years, this may be the second time that you’ve seen a wave that’s just like this one.”

At the same time, the pandemic may be helping drive people into backcountry regions, where, unlike at resorts, avalanche mitigation measures are nonexistent.

Adrian Ballinger, founder of Alpenglow Expeditions, an adventure school based in California’s Squaw Valley near Lake Tahoe, has seen a “massive” increase in backcountry skiing this winter. His company’s guided backcountry skiing program has had more than double the participants this season, and his avalanche education program — which had expanded to 650 students from 350 last season — sold out by December.

He said the COVID-19 pandemic has helped fuel increased interest in the “powder paradise.”

“Many of the resorts put in place reservation systems or aren’t even selling day tickets this year to lessen the number of people there to try to meet COVID regulations,” he said. “Even if they were allowed to go to the resort, a lot of people just don’t want to be around that many people. So the idea of the backcountry is attractive, and I think that’s speeding up a trend of the past decade.”

With more people in the backcountry, Ballinger has heard anecdotally from peers that more experienced skiers may be trying to “avoid those crowds by going deeper, bigger than they normally would at this time of year” to find fresh, untracked slopes.

Ballinger said he thinks it’s a positive that more people are interested in the backcountry — it is his life’s work, after all.

“But of course when it happens all at once and in a season with a really dangerous snowpack, there’s a lot of additional risk,” he said.

There are ways to manage that risk, backcountry experts said. In addition to education to recognize avalanche terrain and conditions, using an experienced guide and going out with the right equipment, skiers should heed reports put out by avalanche forecasters that warn of avalanche danger on any given day.

“Right now, with the type of snowpack, the way to reduce the risk is to simply avoid where the avalanche dragon lives,” Craig Gordon, an avalanche forecaster with the Utah Avalanche Center for two decades, told ABC News. “Simply knowing where potential lies to trigger a slide that’s going to be deep and wide and unmanageable, we can avoid it. We can manage the given avalanche problem that we have through our terrain choices.”

Gordon said that skiers may have a false sense of security if they are carrying rescue gear, when the main objective should be avoiding an avalanche in the first place.

“It’s like, everybody wants to know CPR, but you don’t ever want to have to use it,” he said.

With several more weeks of the season still to go, Ballinger hopes backcountry skiers will exercise caution and “reel it in.”

“The danger is still absolutely lurking out there,” Ballinger said. “We’re all about to get more snow. And so that adds risk because of more weight on the snowpack, and it adds excitement. For most of us, we haven’t skied that much powder this year.”

Greene also stressed that people check the avalanche forecast before they go out into the backcountry.

“It’s really important to make sure to know what the conditions are going to be, what you expect to see, and to make sure what you’re doing fits that,” he said.