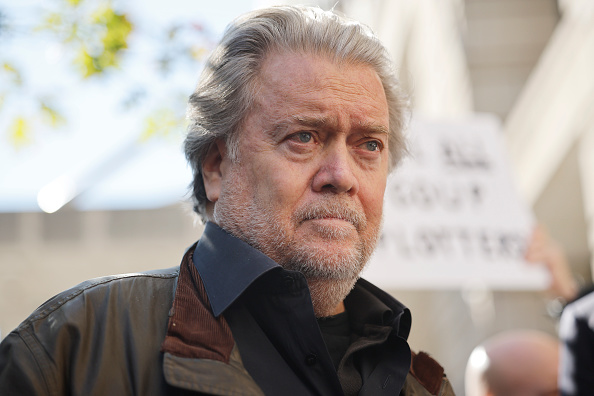 (WASHINGTON) — Former Trump adviser Steve Bannon has asked a judge to let him change lawyers as he defends himself against charges that he defrauded donors to the “We Build the Wall” campaign that was supposed to raise money for former President Donald Trump’s signature domestic project.

Echoing his support of the pro-Trump crowd that attacked the U.S. Capitol on Jan. 6, 2021, Bannon told reporters as he entered the courtroom Thursday that the recent election in Brazil was “stolen” from far-right former President Jair Bolsonaro and that protesters who stormed three government buildings in Brazil’s capital on Sunday were “freedom fighters.”

Bannon ignored questions from reporters asking if he was advising anyone in Brazil’s protest movement.

Merchan, however, was skeptical.

“With all due respect, I believe you’re 100% wrong,” the judge said. “The question is, is this being done to delay the proceedings?”

Schoen said that he, co-counsel John Mitchell, and Bannon have different approaches to the case, and at this point only speak to one another through a third party.

“There has been a direct breakdown in communication so that Mr. Bannon and his lawyers don’t communicate directly,” Schoen said.

Prosecutors accused Bannon of intentionally failing to engage with his lawyers to delay the case.

“As long as the schedule remains, we have no position on who is counsel is,” Manhattan assistant district attorney Daniel Passesser said.

Schoen, becoming more heated, said, “It’s not a fair picture when they stand up and say we’re trying to delay.”

Merchan then summoned lawyers to the bench and sternly addressed Bannon’s legal team.

“I’m sorry you feel you were dragged in here when you didn’t want to,” the judge said. “You will be treated the same as any defendant in this courthouse.”

In the end, the judge agreed to give Bannon until Feb. 28 to secure new attorneys.

“I’m prepared to grant Mr. Bannon further extension to obtain counsel,” Merchan said. “Although the defendant has the right to counsel of his choosing, that right is not absolute.”

The judge declined a request from co-counsel John Mitchell to immediately terminate him and Schoen as Bannon’s lawyers.

“Mr. Bannon is facing very serious charges in this case,” Merchan said. “I simply want to assure that Mr. Bannon is not without counsel.”

Bannon is accused by the Manhattan district attorney’s office of promising donors to the “We Build the Wall” campaign that 100% of their contributions would go toward building a wall along the U.S. southern border. However, he allegedly concealed his role in diverting some of the $15 million in donations toward the campaign’s chief executive, who had pledged to take no salary.

Bannon has pleaded not guilty to charges of money laundering, conspiracy and scheming to defraud investors. He was initially indicated on federal charges, but received a pardon from then-President Trump on Trump’s final night in office.

In October he was sentenced to four months in prison and ordered to pay a fine of $6,500 for defying a subpoena from the House Jan. 6 committee investigating the Jan. 6 attack, but is currently appealing that conviction.