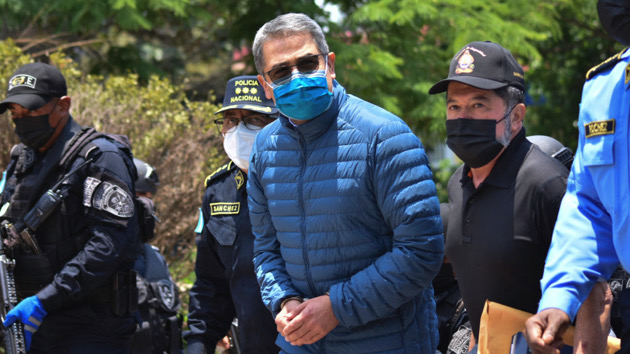 (NEW YORK) — Former Honduran President Juan Orlando Hernandez has been charged by U.S. authorities with drug trafficking and weapons offenses that allegedly link him to tons of cocaine imported into the United States over the last two decades.

U.S. Attorney General Merrick Garland announced Thursday that Hernandez has been extradited to the United States, where he is expected to be arraigned Friday in New York.

Hernandez, according to the indictment, “abused his position as the president of Honduras to operate the country as a narco-state in order to enrich himself and corruptly gain and maintain power; corrupted the legitimate institutions of Honduras, including parts of the Honduran National Police, military, and National Congress; and, while publicly purporting to be an ally of the United States, contributed with his co-conspirators to Honduras becoming one of the largest trans-shipment points in the world for United States-bound cocaine.”

Hernandez, known colloquially as JOH, was repeatedly named in the trial last year of Honduran drug trafficker Geovanny Fuentes Ramirez, who was sentenced to life in prison after he was convicted on charges that, in part, accused him of paying bribes to Hernandez.

Prosecutors say that Fuentes Ramirez was there when President Hernandez allegedly said he wanted to “shove the drugs right up the noses of the gringos,” as they plotted to send as much cocaine as possible into the United States.

Hernandez has denied the accusation that he made the statement and plotted against the U.S.

In addition to Fuentes Ramirez, Hernandez’s brother Tony, a Honduran congressman, was convicted in 2019 of drug trafficking charges and lying to the U.S. Drug Enforcement Agency. He was also sentenced to life in prison.

Hernandez had been an unindicted alleged co-conspirator in his brother’s case while in office — but prosecutors waited until he was out of office this past January to secure his arrest, just weeks later.

The charges against the former president date from 2004 to February 2022, when Hernandez was arrested by Honduran authorities at the request of the United States. The unsealing of the indictment Thursday coincided with his arrival in the Southern District of New York, where he will be prosecuted.

As a Honduran congressman, as president of the Honduran National Congress, and as president of the country, Hernandez was allegedly paid millions of dollars in cocaine proceeds that he used to enrich himself, to finance his political campaigns, and to commit voter fraud, while the people of Honduras endured poverty and violence, the indictment said.

In 2013, Hernandez allegedly accepted a bribe of $1 million from El Chapo to protect the Sinaloa drug cartel’s activities in Honduras, the indictment said, adding that Hernandez allegedly sent associates armed with machine guns to collect the funds.

Other traffickers allegedly paid Hernandez for protection, and he used the money to “ensure his continued ascendancy in Honduran politics,” according to the indictment. To make sure he won the presidential elections of 2013 and 2017, Hernandez allegedly directed others to bribe politicians and election officials with drug proceeds, federal prosecutors said.

If convicted, Hernandez faces a maximum sentence of life in prison.