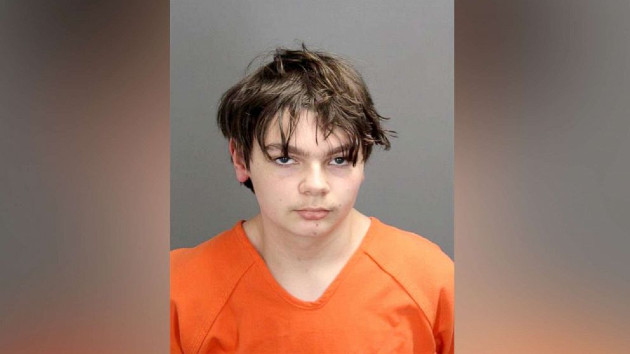 (NEW YORK) — Ethan Crumbley, the teenager accused of gunning down four students and injuring several others at his Michigan high school, pleaded guilty to all charges against him on Monday.

“He’s evil,” Oakland County Sheriff Michael Bouchard told reporters after court Monday, adding that he’s relieved the plea means “the victims don’t have to go through the heartbreak of the testimony and the evidentiary presentation of all the stuff that happened that terrible, terrible day.”

Crumbley, 16, appeared in court in an orange jumpsuit, white face mask and glasses, calmly answering questions from the judge and prosecutor. Crumbley admitted to them that he asked his father to buy him a specific gun.

David Williams, chief assistant prosecutor in Oakland County, said Friday when the plea was announced that there were “no plea deals, no reductions and no agreements regarding sentencing.”

The 24 charges against Crumlbey included terrorism and murder.

“We are not aware of any other case anywhere in the country where a mass shooter has been convicted of terrorism on state charges,” Oakland County Prosecutor Karen McDonald said at a news conference Monday.

The plea “guarantees every person who was in Oxford High School on that day will have a chance, if they want to, to speak in their own words about how this has affected them,” she said.

Crumbley’s attorney, Paulette Michel Loftin, said Monday that her client is remorseful and is “taking accountability for his actions.” The teen is set to return to court on Feb. 9. Sentencing will follow; at the sentencing, victims will have the opportunity to read statements.

Crumbley was 15 at the time of the Nov. 30, 2021, shooting at Oxford High School. He allegedly used his father’s semi-automatic handgun to carry out the attack. Crumbley did not know the students he shot, according to his attorney.

Hours before the shooting, according to prosecutors, a teacher saw a note on Ethan Crumbley’s desk that was “a drawing of a semi-automatic handgun pointing at the words, ‘The thoughts won’t stop, help me.’ In another section of the note was a drawing of a bullet with the following words above that bullet, ‘Blood everywhere."”

Crumbley’s parents were called to the school over the incident, saying they’d get their son counseling but did not take him home.

The teen’s parents, Jennifer and James Crumbley, were charged with four counts of involuntary manslaughter after allegedly making the gun accessible and failing to recognize warning signs about their son before the shooting. They have pleaded not guilty.

She said, “We must do more to keep our communities safe from gun violence. We don’t have time for political games. Let’s work together on background checks, secure storage, and red flag laws — commonsense gun violence prevention measures.”