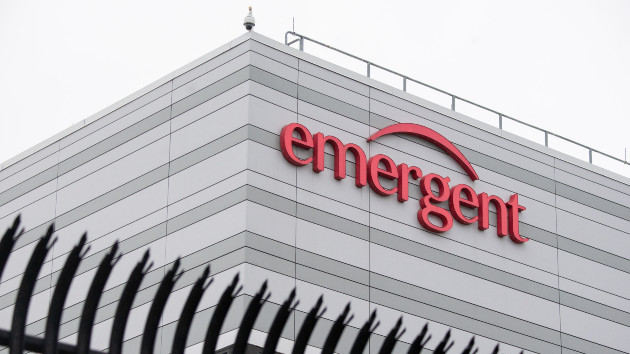 (NEW YORK) — Between March 2020 and February 2022, vaccine-maker Emergent BioSolutions was forced to discard or destroy up to 400 million coronavirus vaccine doses due to the contamination of ingredients, according to a congressional report published Tuesday — a figure that reflects more than five times what was previously disclosed by the beleaguered firm.

Congressional investigators probing the Maryland-based biotech company found that Emergent executives had privately raised urgent quality-control concerns even before the company began manufacturing the vaccines’ key ingredient — despite publicly expressing confidence in their ability to deliver on their multimillion-dollar government contract.

Meanwhile, according to the report, Emergent lab workers intentionally sought to mislead government inspectors about issues at its Bayview, Maryland, plant, and repeatedly “rebuffed” efforts by AstraZeneca and Johnson & Johnson to inspect their facilities.

“Despite major red flags at its vaccine manufacturing facility, Emergent’s executives swept these problems under the rug and continued to rake in taxpayer dollars,” House Oversight and Reform Committee Chairwoman Carolyn Maloney, D-N.Y., said of the report, which determined that the company’s “manufacturing failures and deceptive tactics” led to the largescale waste of ingredients that could have helped make millions of vaccine doses.

None of the compromised batches of the ingredient in question made it into finished vaccine doses released from Emergent’s plant, the committees said.

An Emergent spokesperson said the firm learned of the congressional report from news outlets who reached out seeking comment, and did not address a list of detailed questions from ABC News.

“Emergent has been open and forthcoming with the FDA, Congress and our partners about the work at our Bayview site and the challenges that were encountered, including providing thousands of documents, willingly participating in a congressional hearing and inviting them to visit our facilities,” the spokesperson said.

Tuesday’s joint report from the House Oversight Committee and the House Subcommittee on the Coronavirus Crisis aggregates the findings of their yearlong probe into Emergent’s quality control issues. As part of their efforts, committee investigators secured internal Emergent emails and interviewed several key witnesses, including senior officials from the U.S. Food and Drug Administration.

Emergent landed a $628 million contract from the Food and Drug Administration in June 2020 to help develop Johnson & Johnson and AstraZeneca vaccines at its Bayview facility as part of Operation Warp Speed, the Trump administration’s rapid vaccine development program.

But according to the committees’ report, issues at Bayview arose even before the firm secured its vaccine-development deal. In a flurry of internal emails during the spring of 2020, executives and managers expressed a growing concern with the firm’s response to an April 2020 FDA audit that identified troubling safety deficiencies.

Sean Kirk, at the time an Emergent executive, wrote in a June 2020 email to a quality-control manager that the situation was “deeply concerning” and demanded that he “fix this.” In email correspondence with another colleague that same day, Kirk wrote that “room for improvement” in the Bayview plant’s quality control systems “is a huge understatement.”

Outwardly, however, the firm claimed its longstanding relationship with U.S. government agencies — which included multiple contracts to develop anthrax vaccines — was evidence of its competence. But internally, said the report, alarm bells continued to sound — and anxiety over Bayview’s readiness grew.

“Of all the things we have to deliver on [Operation Warp Speed], the thing that keeps me up at night is overall perception of state of quality systems at bayview [sic],” Kirk wrote to Emergent CEO Robert Kramer in late June 2020.

The drumbeat of concern over quality control at Bayview reached a fever pitch in the fall of 2020, as internal memos ahead of a September 2020 FDA inspection indicated that executives were fully aware of gaps in quality control measures for months after vaccine development began, according to the congressional report.

“We are not in full compliance yet — BUT — we are making [vaccine] batches NOW,” Emergent’s senior director of quality wrote in an internal email, according to the report. “Our risk is high!”

In November 2020, according to an email obtained by the committees, a consultant with an outside firm warned the company that “ultimately Emergent will have to decide what level of risk they are willing to accept, but this is one of those where you really better listen to me and do exactly what I tell you to.”

“I am stating very loudly that this work is NON-compliant,” the consultant said. “And a direct regulatory risk.”

AstraZeneca representatives who visited Bayview in November 2020 complained that “a lack of fundamentals [was] contributing to bioburden issue,” and that “poor cleaning was part of the root cause” of the persistent contaminations, per the report.

Emergent executives acknowledged in internal emails that, in its rush to ramp up production, it hired temporary employees with “little or no pharmaceutical experience,” and described trash “piling up” in its facilities, said the report. FDA leaders told the committees that Emergent “hired a lot of individuals not as familiar with vaccine manufacturing, that did not have adequate training to do so” — a message it conveyed directly to Emergent as early as April 2020.

The committee found that despite these red flags, Emergent “did not remediate the issues, and problems persisted at the [Bayview] facility for months.” And from late 2020 to early 2021, the committee wrote, a series of contaminations at Bayview led to the disposal of enough vaccine drug ingredients to produce 240 million doses.

“The investigation has revealed that the impact of these issues is larger than previously known,” the committee said in its report, “with more incidents of contamination and millions more vaccines [ingredients] destroyed than previously revealed by Emergent.”

In February 2021, under pressure from manufacturers to tighten up quality controls, Emergent apparently “rebuffed multiple requests from Johnson & Johnson’s quality staff to access Bayview,” the committee wrote. Around the same time, the committee found that Bayview lab workers sought to hide the extent of their failures prior to an FDA site visit.

According to an email written by one of Emergent’s external consultants and obtained by the committees, Emergent employees removed quality-assurance “hold tags” from two batches of Johnson & Johnson vaccine drug ingredients just one hour before FDA inspectors began their tour of the facility. The “hold tags” were bright yellow and indicated that those batches may have quality issues.

“Since the tags were deemed necessary before and after the FDA’s visit, it is my understanding, based on the entirety of what I observed and was told, that the purpose of removing the QA [quality assurance] hold tags was to avoid drawing attention to the two subject containers during the tour by the FDA inspectors,” the consultant wrote.

In their report, the committees indicated that senior leaders at Emergent were aware of the removal of the tags, and that the incident amounted to an “apparent attempt to impede oversight.” The FDA inspectors “still identified serious concerns” during their visit to the site in February 2021, but did not halt production at the facility until April 2021, after Emergent alerted the Biden administration to its cross-contamination incidents.

Dr. Peter Marks, director of FDA’s Center for Biologics Evaluation and Research, told the committees in a briefing that FDA leaders and inspectors bore some responsibility for the extent of leniency they granted Emergent.

“Shame on us for thinking that [Emergent’s] experience in manufacturing would mean they would be able to move ahead and make the vaccines in a high-quality manner that we would expect for an experienced vaccine manufacturer,” Marks told committee members, according to the report.

In May 2021, during a hearing before the Congress, Emergent executives said the company hoped to resume production of the vaccines “in the coming days.” According to the committees, that didn’t happen; three months passed before regulators allowed Emergent to resume vaccine manufacturing in August 2021. But even then, the problems persisted.

From August 2021 to February 2022, the committee found that Emergent manufactured 15 new batches of Johnson & Johnson vaccine, six of which — the equivalent of 90 million vaccine doses — “were either aborted or rejected by Johnson & Johnson.”

All told, Emergent was forced to discard or destroy up to 400 million doses’ worth of the ingredient that helps make the coronavirus vaccine. Company executives had previously pegged the number at 75 million.

In November 2021, the Biden administration canceled Emergent’s contract to continue developing vaccines, which at the time would have paid the company an estimated additional $320 million.

But the real victims, according to the committees, are those who would have benefited from the 400 million doses that failed to materialize.

“Emergent’s failures wasted hundreds of millions of taxpayer dollars and impacted our country’s ability to meet the urgent, global need for coronavirus vaccines,” the report concludes.

The Emergent spokesperson told ABC News that the company “remains committed to being a trusted partner of the U.S. and allied governments … [and] will continue to use our more than 20 years of public health preparedness experience to help inform an all-of-the-above approach to help prepare for the public health challenges to come.”

On Feb. 7 of this year, Emergent told the committees that its Bayview plant was entering a “maintenance shutdown period.” The company said it hopes to resume manufacturing in August 2022.