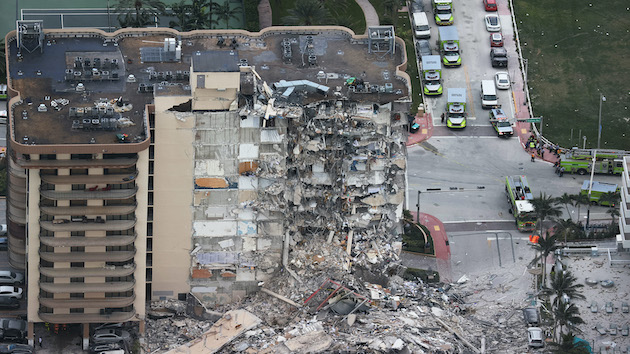 (SURFSIDE, Fla.) — Champlain Towers South condo board members, Surfside town officials, and engineers grappled with issues related to the building’s 40-year recertification process, potentially delaying much-needed plans for repairs in the weeks leading up to the collapse of the building, emails released by the town show.

It’s unclear if or how the apparent delays in the repair plans detailed in the messages may have contributed to the collapse, but the series of emails published by the Town of Surfside offers a glimpse into what kind of communication was taking place right before the deadly accident.

As of Tuesday, 32 people were confirmed to have died and 117 people remained unaccounted for following the collapse of the 12-story building on June 24.

In the weeks before Champlain Towers South’s collapse, emails about a “dire parking situation” suggest that the town’s approval process for a satellite parking space may have contributed to delays in submitting plans for repairs of the condo building, the documents show.

In one email dated May 20, Champlain Towers South engineering consultant Frank Morabito told Surfside town planner Walter Keller that before the engineers could begin working on the building, they needed to hear from the town about how to deal with the upcoming issue of construction vehicles occupying a significant portion of the residents’ parking spaces, according to the documents.

The emails suggest that Morabito and the Champlain Towers South Condo Association did not receive a reply from town officials for a month, prompting building manager Scott Stewart to email Keller, town manager Andrew Hyatt, and Surfside building official James McGuinness on June 21, asking for prompt approval of a satellite parking location for five vehicles so renovation plans could “keep moving forward.”

“This is holding us up, and costs are going up, and [our] 40 year is coming up fast,” Stewart wrote three days before the collapse. “This temporary satellite parking location would allow us to better expedite the repairs on one of [the] Surfside gateway properties.”

According to the records, the town manager and the town building official responded to Stewart on June 22 and 23 — the eve of the collapse — about issues that needed to be addressed before they could grant temporary use of the requested satellite parking lot.

Meanwhile, McGuinness, the town official, was in correspondence with a real estate management company regarding remodeling work that was needed on the building’s facade, pool, and plaza, another chain of emails shows. According to the emails, the condo sought to submit a dry run to “at least start reviews of the plans” as early as June 9, then later followed up with the building official for an invoice for the dry run.

Surfside officials told ABC News that McGuiness was not available to comment on the matter.

Earlier emails outlined challenges faced by building representatives as they tried to keep repairs on track. In a message dated May 26, resident and former condo board member Myriam Notkin complained about tar kettle fumes coming into her apartment during the building’s roof repair, asking if the operation could be relocated. Condo board president Jean Wodnicki responded that the roof remediation plan was approved by the town and that the operation couldn’t be relocated without significantly changing the course of the project.

“We have had a number of presentations on the plans over the last 6 months outlining the process,” Wodnicki wrote in an email responding to the complaint. “The specific location of the coal tar kettle and crane has been explained to the residents for at least a month.”

Further delays could cause further damage and more expense, Wodnicki wrote in the email, noting that the roof repair needed to be done before the rainy season.

Notkin is among those missing following the collapse.

In response to questions about the emails released by Surfside, town manager Hyatt said in a statement that at no point did the Champlain Towers South Condominium Association indicate in any plans or permit applications that emergency action by the town was required.

“There was no indication during any communications between the Town and the association by telephone or electronic mail that this submission required emergency action by the Town of Surfside,” Hyatt said. “The scope of work for repairs was not received until June 21, 2021, and not in the form of a building application. To date, no permit application for these specific repairs has been received by the Town.”

Hyatt also emphasized that plans sent to officials in May were only preliminary.

“The plans received by the Town of Surfside beginning on May 12, 2021, were preliminary and clearly marked ‘Not for construction.’ The Town’s position is that these plans were not final. In fact, no applications for construction permits were submitted,” he said. “It would appear that the Champlain Towers South Condominium Association sought to address a number of issues outside the scope of any proposed 40-year re-certification work such as the installation of new natural gas service and delivery lines, the reconfiguration of existing parking, the moving of parking off site, and other repairs.”

Asked about the messages, a spokesperson for Champlain Tower South Condominium association said, “The emails speak for themselves.”

Joel Figueroa-Vallines, an Orlando-based forensic structural engineer and president of SEP Engineers, told ABC News that the delay in addressing issues with the building is concerning, and that periodic checkups, inspections and overall maintenance are important to keep a building in good shape. Figueroa-Vallines has no ties to Champlain Towers South, and no personal knowledge of the investigation.

For officials, the latest emails are among the many things that will be investigated.

Surfside Mayor Charles Burkett told ABC News that he’s still in the process of gathering information to understand what exactly happened, but said, “I think it sounds like those emails are going to be important.”

Last week, a team from the National Institute of Standards and Technology (NIST) was sent to the site by the Biden administration, and is currently in the preliminary stages of investigating what caused the apparent building failure.

“It will take time, possibly a couple of years, but we will not stop until we have determined the likely cause of this tragedy,” said Dr. James Olthoff, the director of the NIST, which also investigated the collapse of the World Trade Center.