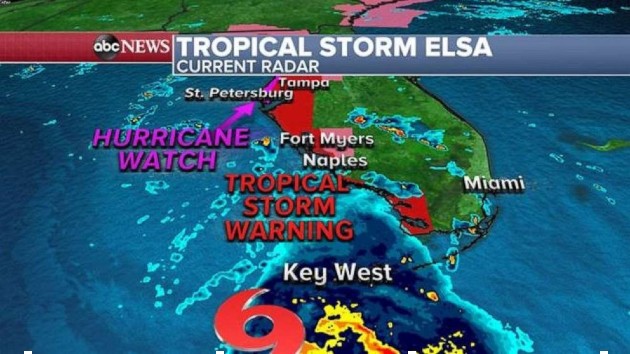 Landfall is expected around 8 or 9 a.m. Wednesday near the Big Bend region along Florida’s west coast.

Storms with winds of 74 mph or higher are considered hurricanes.

Elsa’s path is sparing Miami, where rescuers are still searching for victims of the deadly Surfside condo collapse.

July 6th – Starting Tuesday off with a time-lapse as Elsa’s outer bands stream past the office. Tropical Storm #Elsa is passing just to the west of Key West this morning. Heavy rainfall, strong wind gusts in squalls, and a few tornadoes are possible across South Florida today. pic.twitter.com/6J1IZojt2C

A hurricane warning is in effect along Florida’s northern Gulf Coast while a tornado watch has been issued from Miami to Tampa through 11 p.m.

The University of Florida in Gainesville has canceled all classes for Wednesday as Elsa closes in.

Storm surge could reach 3 to 5 feet along Florida’s Gulf Coast.

Rainfall totals may climb to 6 to 8 inches across Florida, Georgia and the Carolinas through Thursday.

The ground in many parts of the Sunshine State is already saturated after a 300% rain increase over the last two weeks, Lt. Gov. Jeanette Nunez said Tuesday.

Residents should be prepared to be without power for the next few days, but widespread evacuations aren’t expected, Florida Gov. Ron DeSantis said.

After barreling through Florida, Elsa will weaken to a tropical storm or tropical depression as it moves through Savannah, Georgia, and Charleston, South Carolina.

By the end of the week, Elsa will bring rain and wind to the Mid-Atlantic and Northeast.